Posted on January 14, 2016 by thewineraconteur

All good things come to an end, as the old saying goes; and this dinner was no different. After studying the dessert menu, we decided to share one of our old stand-bys, namely Crème Brulee, and the one offered was the classic interpretation with Madagascar Vanilla Bean and fresh berries. My Bride still had some of her Cypres de Climens Barsac 2010 from our Foie Gras course, and of course, my glass of that wine had evaporated. I had to order a glass of wine, just because I enjoyed the name so much and it reminded me of one of our vacations that we enjoyed immensely and it is the birthplace of that devilish rogue Rhett Butler. The wine has one of the longest names that I have encountered, but I guess that makes it easier to remember. The Rare Wine Company Historic Series Madeira Charleston Sercial Special Reserve NV made by Barbeito in Madeira, Portugal. This wine is part of the Historic Series and each Madeira type is named for one of the classic cities in the United States that played a major factor in Madeira wine. The Sercial grape has become more prominent in Madeira again, because it is one of the classic types, and since the regulations that have evolved about wines in the European Common Market, a Sercial must be made from the Sercial grape, whereas in the old days, only the blenders knew how much Sercial actually was used blended with some of the more common Madeira varieties. In fact now if the label says Sercial, there is eighty-five percent of that fruit and the balance could be from higher producing crops as Verdelho and Tinta Negra Mole, both of which produce good Madeira wine, but do not carry the cachet of some of the classic grapes. Even though Sercial wines are on the lighter side of Madeira wines, they are legendary and have been known to age and mellow in the bottle for over fifty years. This wine with its classic almond nutty flavor went smoothly with the Crème Brulee. 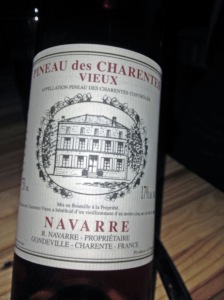 The General Manager came over as we were having dessert and he brought with him to introduce to me the owner of the restaurant. I guess he must have told the owner that I was into wines, because of my Blog, and I am proud of my writings, as eclectic as the columns can be. I had to laugh when I met the owner, because I had remarked that almost my entire working career I had Mondays off, and he laughed, and said that he has as well. The downside of that was, that I had never had the chance to see his vaunted wine shop, even though it is in the same city that I live in; go figure.

While the owner and I were having our conversation, the General Manager brought over two glasses of a complimentary beverage. So my Bride and I ordered the Parfait Vertical from the dessert menu, which was White, Dark and Milk Chocolate Mousse, Candied Hazelnuts and served in a chocolate shell. We enjoyed our Navarre Pineau des Charents Vieux NV, which is a fortified wine that was introduced in 1945 for wines that were not considered Cognac. This wine is made from the Ugni Blanc grape and is blended with a six year old Grande Champagne Cognac from the same winery. The wine must be aged in Oak for at least eighteen months, and if it carries the wording of Vieux (old) then it must spend at least five years or more in oak. I found it to be a very smooth and elegant “Cognac” though it is technically not a Cognac, though it is made from the same grapes, same blending and the same region. This fortified wine was created to make use of the wines that were not considered to be classic Cognac, and it created a second market for the vintages that may have been excessively heavy or light. Perhaps my palette is not that sharp to discern such subtleties, but we both enjoyed it. We are looking forward to several more visits to Vertical Detroit, and I may even get the chance soon to visit the wine shop that created this restaurant.

2 Responses to Dessert at Vertical Detroit