Posted on August 11, 2013 by thewineraconteur

“Oh we’ve got trouble; we got lots and lots of trouble.  We got trouble right here in River City”

I am paraphrasing some of the lines from a great number from The Music Man, the classic American musical of stage and cinema.  This is the second of a new challenge among some of the wine Bloggers who come up with a theme that we must all write about in conjunction with our favorite topic of wine and the topic chosen was trouble.  I accepted the gauntlet of a challenge from “The Armchair Sommelier” (a writer that I myself follow) and then I had to think about the subject.  Trouble could easily have been a story about my youth and perchance a night of over indulgence, but that seemed too contrite and expected.  Then I thought further and decided that no one ever over indulges on wine, so it would be categorized as fiction.

To me trouble means not according to Hoyle, a SNAFU or something that would create problems.  There should be no problems with wine, though I know that I have wrote about a bottle of Champagne that I discovered to late in my cellar, that would have been appropriate, but I had already done that.

Then it dawned on me, two occasions where I had to remember the Boy Scout motto “be prepared.”  Where I had to react in a way similar to episodes an old television show called MacGyver, before I gave up watching television for good. 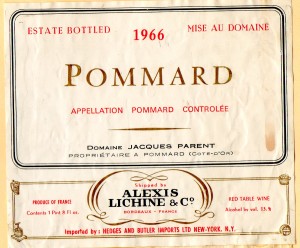 One time, I remember going to someone’s house and was taking some wine as they had invited us out for dinner.  It was going to be a nice quiet evening of food, wine and conversation.  One of the wines that I had brought was one of my all time favorites Marquis de Riscal Rioja Reserva 2000, which I had bragged about to the other couple as a great dependable wine.   As we were getting ready to have dinner, I asked them in they had a corkscrew, so that I could open up the bottle of wine.  They informed me that they did not own such a device.  Now I immediately thought that I was among heathens, as this is as important of a device for the kitchen as a pot or a pan or a knife or a fork.  I was stunned for a moment, and since we had been drinking cordials during appetizers, I really did not want to leave immediately to go find a corkscrew.  I knew the other man prided himself on being a bit of a handy-man, so I asked for a long wood screw, a screwdriver that would correspond to the wood screw and a pair of pliers.  When my odd request was fulfilled, I removed the entire metal capsule from the top of the bottle to get a clear view of the cork.  I proceeded to insert the woodscrew into the cork, until it was the length of the cork, then I grabbed the pair of pliers and slowly and carefully pulled on the head of the woodscrew and slowly pulled the cork out of the bottle, by more brute strength, because there was no mechanical leverage to avail, like what a mechanical corkscrew offers.  It worked, and we were able to continue on with our dinner.  Since that time I have had to do this once again, so now I also use one of my wine carriers to bring the bottles, because they are fitted with a corkscrew and I can proceed with out the hindrance of pagans (just joking). 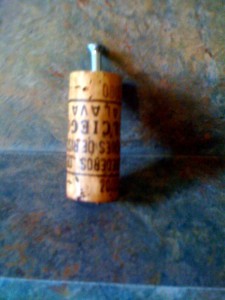 The other occasion, and unfortunately this trouble has been encountered many times since, was when I was just learning about wines.  I had a bottle of Pommard 1966 by Alexis Lichine that I was really looking forward to having.  This was a pretty classy bottle of wine for the youngster that I was, but I figured that was how I was going to learn what different wines tasted like.  Why buy a bottle of Burgundy, when you had a chance to get a bottle of Pommard?  All was going well that evening, until I went to remove the cork from the bottle and it crumbled on me, which was the first time I had ever encountered this from a cork.  At first I was devastated, should I throw out the bottle?  I could not do that, not on a student’s income.  As I started to think, I realized that I had just been given a Melita coffee system, where one placed a funnel-like apparatus over a cup or mug, put a coffee filter into the apparatus, add the ground coffee into the filter and then pour boiling water into the apparatus and let the coffee drip into the cup.  I quickly found the coffee apparatus and grabbed a coffee filter and placed the unit over a large carafe that I had acquired.  I slowly poured the contents of the bottle into the apparatus and let the filter handle the disintegrating cork.  Half way through the procedure I changed the filter paper, as it had accumulated a lot of cork, and finished emptying out the bottle of wine.  Perhaps not the classic way to decant a bottle of wine, but it did work, and may I add that the wine was wonderful and I saved the evening.  Since then I have maintained a funnel at the house and have had to use this special technique on several occasions.

A non-technical wine writer, who enjoys the moment with the wine, as much as the wine. Twitter.com/WineRaconteur Instagram/thewineraconteur Facebook/ The Wine Raconteur
View all posts by thewineraconteur →
This entry was posted in Wine and tagged Alexis Lichine, France, Marques de Riscal, Pommard, Rioja Reserva, Spain. Bookmark the permalink.