Posted on January 18, 2019 by thewineraconteur

When I am at my local wine shop The Fine Wine Source, I never know what I may end up tasting, and that is what is exciting.  Though I try to not make a pest of myself, I do like to take notes, especially when I am trying something totally new.  I once had a reader write to me that he was going to have a bottle of Rivesaltes as part of his birthday celebration and I had to look it up, as I did not know the wine at all.  I must admit that part of my lack of knowledge is because it is a dessert wine, and in the big picture, this is a category that I have had the least amount of wines. 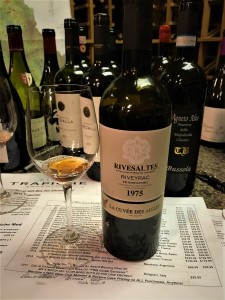 Rivesaltes is an appellation for the historic sweet wines of eastern Roussillon, part of the Languedoc-Roussillon that is becoming much more popular, in the deep south of France. The sweet “vin doux naturel” wines produced in this area have been famous and reported on since at least the 14th Century. The technique used to make them is one of several employed for sweet wines. Unlike botrytized wines or ice wines, “vin doux naturel” wines are made by mutage, a process of stopping the must fermenting while there is still a high level of natural sweetness. With their high levels of residual sugar and alcohol these wines are sweet and a bit syrupy, which is an easy way to describe it.  Rivesaltes wines are often confused with Muscat de Rivesaltes wines, which are similar in style and come from the same area, except that it is made from Muscat grapes, while Rivesaltes is made from Grenache of all three forms, that is Noir, Blanc and Gris.  There are a couple of different designations for this wine, depending on its age.

The Riveyrac Rivesaltes Les Cuvees des Aigles 1975 is considered to be a Tuille, which are made from fifty percent Grenache Noir and is aged for two years, this wine is actually at the top rung of classifications as it is termed Hors d’Age and it is aged for at least five years.  On the back of the bottle there was an additional label “This wine has been aged, stored and kept intact in oak barrels since its harvest, by the vineyard owner and his heirs.  It was bottled in 2014, under optimum conditions without any treatment.”  So, for almost thirty years this wine has been aging in the barrel and the color had a chestnut brown color with a nose promising dried fruits and spices; it was totally balanced and had a very long finish.  I was in love with this wine, and so was my Bride.  If it was offered in a split, I think she would have had me carry one home, but for us a regular bottle of this would be over kill, even though it was totally delightful.

A non-technical wine writer, who enjoys the moment with the wine, as much as the wine. Twitter.com/WineRaconteur Instagram/thewineraconteur Facebook/ The Wine Raconteur
View all posts by thewineraconteur →
This entry was posted in Wine and tagged France, Grenache Blanc, Grenache Gris, Grenache Noir, Languedoc-Roussillon, Les Cuvees des Aigles, Rivesaltes, Riveyrac. Bookmark the permalink.