Posted on January 10, 2019 by thewineraconteur

I really enjoy going out to eat and drink and if there is a chance to dance that is a real bonus.  How can a man not want to be out with his lady in all of their finery enjoying a night out on the town?  I am sorry, but there are a few nights that I just avoid going out and New Year’s Eve is one of those nights.  I find that the menu selection has been reduced to make the kitchen staff more productive and efficient and we go out often enough that normally what is exciting to others, just doesn’t do it for me anymore.   I am also leery of establishments that have a one price beverage charge included into a package for the night.  I find that there are some out there, especially the young, who have not honed their social and drinking skills, who think that they have to drink double what they think they must drink for the night.  I am sorry, but I do not suffer well the inebriated or the accidents waiting to happen. 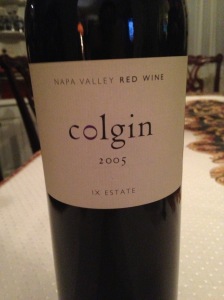 We have been having a New Year’s Eve party at the house and it has become a night out for the family.  Some of the teenagers and the early twenties we lose for a couple of years, because they think that they have to go carousing.  We eventually get them back, especially after they pay the extra high prices for a night out on the town.  Also, just call me an old romantic, but how romantic is it, if at the stroke of midnight, they are taking photos and texting social media, instead of kissing their date?  All I know is that we put out a hell of a spread.   We have fruit and vegetables, pates and spreads, cheese and crackers, and this year we even found a wonderful raclette with truffles to add some extra interest.  Shrimp cocktails in the unlimited count containers I think are always a nice touch too.  Salmon, steaks and chicken appease all the protein choices, and if that selection doesn’t work, then maybe they need to go out and the following year, our menu won’t be so bad.  Then we clear it all away and bring out the sweets, and then some sit back and watch television, while others play board games designed for crowds with potentially lewd and boisterous answers, and to be truthful I can do without on both of those, but the majority rules.

Beverages flowed from the late afternoon onto the magic hour, and we always have some sparkling juice and ciders for the younger set, so that they can join in for the celebration.  I will only discuss two of the wines of the twelve or more bottles that seemed to evaporate that evening.  The celebrity of the evening that was opened up early to allow to breathe, got some extra breathing time as the cork crumble, which can be frightening, but the bottle was decanted and it was perfect.  We celebrated with Colgin Cellars IX Estate Napa Valley Red Wine 2005.   Ann Colgin founded this winery in 1992 and it has become one of the legendary “cult” wines of the valley.  The winery has three different vineyards and this comes from the Nine Estate is a twenty-acre vineyard on a broad slope of the St. Helena hill.   The IX estate red wine is a Bordeaux blend of Cabernet Sauvignon, Merlot, Cabernet Franc and Petit Verdot.  Every wine is aged in new French Oak barrels from the Cognac region.  The wine was just perfect and totally balanced and if there was a fault to be had, it was that this was the last bottle.  The second wine that will be mentioned was Far Niente Estate Bottled Cabernet Sauvignon Napa Valley 1998 and if it hadn’t followed the Colgin, it would have been stellar, but it was still excellent and it was decanted as well before serving.  This is a legendary estate that was founded in 1885 by a relative of the famous American painter Winslow Homer, who may have even produced the artwork for some of the early labels.  Of course, this is another winery that became abandoned because of the Prohibition and was reclaimed and rebuild by Gil Nickel in 1979 of Nickel & Nickel fame.  Originally, they only made a Cabernet Sauvignon and a Chardonnay, though ten years later they also issued a dessert wine.  Here we were enjoying a wine that if similar to later offerings may have about three percent Petit Verdot and aged for about seventeen months in French Oak.  I found it curious that Oakville where Far Niente is based is one of the core sub-regions of Napa Valley and was granted an AVA in 1983, here was a wine in 1998 that was still using Napa Valley as a selling point.  This was really a charming wine, also with no faults, other than it followed the Colgin which was a bigger wine and almost three percent higher in proof.  A charming night with some great wines and not too often that we have two power-houses back to back.