Pins and Skins and Whatever Else

Posted on January 8, 2019 by thewineraconteur

Some families are big, and some families are BIG.  There are five girls in my Bride’s family and then add husbands, children and grandchildren and then the numbers grow exponentially.  On top of that add just first cousins and their families and one almost feels like you need a convention center to handle the crowds.  The last several years, there has been a concerted effort to get as many together during the Christmas week, and I believe that my Bride is always one of the ringleaders.  Over the years they have tried a couple of venues, and one was very good, but the family had to be separated due to logistics of the rooms and it was kind of expensive.  Several places were bandied about and they finally settled on a place, that only required small minimums of charges and food, and they also allowed food, but not drinks, to be brought in. 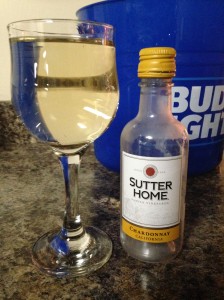 This new place during the summer offers baseball diamonds, if you choose a time that doesn’t have a league going, and the same is for bowling, though I have to admit that it is the smallest bowling alley facility since my days growing up in a Detroit neighborhood, because most centers that I see now are huge.  They also had “wally ball” a variation of hand ball and unfortunately, we had one member from my generation discover that we cannot compete with the youngsters; our minds might think we are still young, but our bodies tell us a different message.  There was also a game called Pins and Skins, a game that I had heard about, but I did not know that it actually had a name.  The origin of this game as best as I have learned arose from tailgating parties and the State of Michigan is quite infamous for the extent that some tailgating parties go, to the point that some attend the party, but forgo the actual game.  Pins and Skins, if you are like me, needs a little introduction, in that the game is rather simple and a minimum of equipment.  One needs two complete sets of bowling pins (matching sets might be a bonus) and one football.  Two teams face off across the field (room here) and throw the football at the opposing teams bowling pins in the attempt of knocking them all down, then the other team takes the football and aims at the other set of pins.  While this was going on, in a big room the actual party was going on, and the facility started bring pizzas to the room, as I guess they had a formula of how many slices per person, and they also kept bringing pitchers of assorted soft drinks.  The balance of the food was the traditional potluck style of banqueting.  I do know that there was some coordination, so that no one dish would monopolize the selections.

The adult beverages had to be furnished by the establishment, so hence the per person charge for the evening was low, it could get expensive at the bar end of the affair.  The bar had a good selection of liquors for mixed drinks and quite a large selection of beers, both the commercial bulk types and the new craft beers that are the darlings of the drinking set these days.  I also would venture to say that between baseball, bowling and a couple other physical sports, beer would be the beverage of choice.  I might have even chosen a beer for myself, but then I would have deprived myself of an evening where the wine was selected as a convenience for the center.  I was going to buy a couple of bottles of wine from the bar to put out on the tables, but all the wine came in the handy dandy miniature bottles that one encounters on an airplane and a wine glass that when filled to the top contains the contents of the bottle.  My Bride and I were going to have Sutter Home California Chardonnay NV for the evening.  We have had the wine before, and on some business trips she actually takes bottles of this wine and gets a takeout meal for her hotel room, rather than having dinner in a restaurant by herself.  The Sutter Home Estate is located in St. Helena, one of the famed cities in Napa Valley, the estate was actually a winery in the 1870’s and continued until the government in their infinite wisdom decided to make decisions for the citizens and we had the great tragic experiment known as Prohibition.  After Prohibition the estate was just basically abandoned until 1948 when the Trinchero family purchased it and began a winery again.  In 1972, the family was experimenting with a Zinfandel wine that ended up white and dry and they called it “White Zinfandel, “and they produced 220 cases.  In 1975, the 1974 production had a problem and it had residual sugar and slight pink cast, and history was created.  The wine was getting popular and was at production of 25,000 cases and eventually this one wine grew to a count of 4.5 million cases.  This was nothing to sneeze at, and while the Chardonnay is probably not produced in that large of numbers, it is a bulk wine that pleases plenty of people.  In fact, in 1994 Wine Spectator gave Bob Trinchero a distinguished service award for “having introduced more Americans to wine on the table than anyone in history.”  I actually remember that issue, and at first, I was shocked, but then I agreed that any wine that is used as an introduction is great, and I have had worst wines over the years.  It is just fun learning some new things that I did not know, but then I also realize that Sutter Home Winery has allowed the Trinchero Family to expand and produce wines at the other end of the spectrum, so all is good.  I also know that the group enjoyed this outing so much, that my Bride actually paid for the rental of the room for next year.

A non-technical wine writer, who enjoys the moment with the wine, as much as the wine. Twitter.com/WineRaconteur Instagram/thewineraconteur Facebook/ The Wine Raconteur
View all posts by thewineraconteur →
This entry was posted in Dining, Wine and tagged California, Chardonnay, Sutter Home, Trinchero Family Estates. Bookmark the permalink.