Posted on October 26, 2018 by thewineraconteur

I was on a roll at Fine Wine Source in Livonia, Michigan tasting some great wines and all because I was picking up my monthly club selection.  With the advent of the Coravin System, wine shops must be doing a bang-up business letting customers taste wines without the wines going bad.  I probably take longer than the average taster, because I am attempting to take a photo of each wine, and we all know what a rank amateur I am with a “smart-phone” in my hand.  The next two wines that I tried are what some would call “second tier” and I will let you decide, because most second labels that I have tried have not been losers at all. 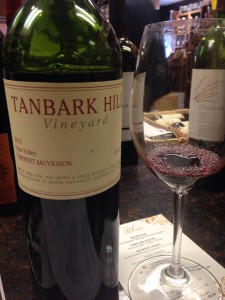 It is understandable that the first wine from this winery I had never encountered, and that is because the entire winery only produces about two-thousand cases of estate wine, and that is in three categories, and one category is a very small run dessert wine that is basically only sold at the winery, in fact that can be said of their first wine, because it is sold first come, first serve by internet sales for the most part.  The wine that I tasted was the one they sell to the trades, because it is made from their young vines.  The Philip Togni Vineyards Tanbark Hill Cabernet Sauvignon 2013 is from a small twenty-five-acre family run estate that is 2,000 feet about sea-level in the Spring Mountain District sub-appellation of Napa Valley.  The first vines were planted in 1981, and they are interested producing a Margaux-style Claret for long term cellaring as they only grow Cabernet Sauvignon, Merlot, Cabernet Franc and Petit Verdot.  If the wine I tasted was from young vines the first label wines must be awesome.  This wine was big and vibrant, what one expects from a solid Cab from the Valley without being a cookie-cutter style.  At $70.00 this wine should deliver and it does. 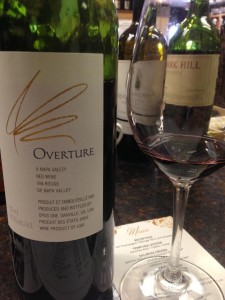 The second “second tier” wine I had was Opus One Overture NV, which when I first encountered this impressive wine was at the winery, in fact, back then, it was the only venue that one could buy it, and we bought it on a scale of three to one.  The first time that I had Opus One was at a charity fund-raiser and they were serving Opus One 1983.  Opus One was a joint venture between Baron Philippe de Rothschild of Chateau Mouton Rothschild and Robert Mondavi.  It was the first premier California wine and started the whole cult wine sensation that is still going strong.  It was conceived in the 1970’s and the first vintage was 1979 and released to the public in 1984.  It is now partly owned by Constellation Brand.  Opus One is a one-trick-pony as they are an estate winery with one wine, all from their Oakville vineyards including part of the famed To Kalen Vineyard.  They only grow Cabernet Sauvignon, Merlot, Cabernet Franc, Petit Verdot and Malbec.  In 1993 they began Overture for fruit that did not make the cut and they tend to even blend the wine with earlier vintages as well to try to maintain a full young Opus One for impatient drinkers who aren’t interested in cellaring wine.  After all of the great wines that I tried, this was the least impressive and I so wanted to try this wine.  I mean there was nothing wrong with the wine and if I had tried it first, I might have been more impressed, and I never would have expected that I would not be totally in love, but who knows, perhaps the next Non-vintage issue will blow my socks off, just like the first time that I had Overture.