Posted on September 20, 2018 by thewineraconteur

Ms. Yoga is always a joy to be around, because not only does she like wine, but she is a good egg, as we used to say.  She has a great sense of humor, and things pop up that remind us of other events.  I remember that I wrote about a wine from Duckhorn and she remembered the time I had a special invite for some tastings, before they had a tasting room, and we were in the back of semi, sitting on and cracking open crates of wine to open and to try with one of the sons.  She also reminded me, which I had forgotten, that the son had given her son a Duckhorn Duck whistle, which he still has, and he was not even in pre-school then, and now he is attending a university.  Time goes on.  The last night that Ms. Yoga was visiting we went out to eat, and I know that is not hard to believe.  She lived near where we are now and she remembers places that are long gone, one of the places that I wrote about was De Palma’s where the waiters might break out in an aria when they were not serving.  We took her to another place that did not even exist when she lived in the area, and the restaurant is owned by the grandsons of De Palma’s. 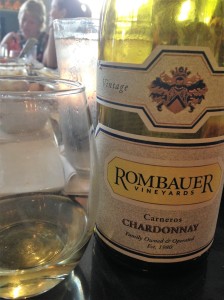 We went to Nico & Vali, a charming little bistro that has already revamped the layout to accommodate more diners without making it feel cramped.  When Ms. Yoga is in attendance, dinners are a series of plates, sometimes with no rhyme or reason and she trumps most restaurants sequence of dishes.  We munch or nosh and then she creates doggie bags, as she wants to eat some, but not a full meal of anything.  We had Beef Tartare which they prepared with Piedmontese Beef Tenderloin with Castelvetrano olives, capers, roasted red and Fresno peppers and crostini.  We had Mussels Siciliano in a tomato broth with toast Ciabatta and almonds.   There was also Ceci Bean & Tomato Jar, a chickpea spread with roasted grape tomatoes, house Pesto, shredded Parmesan and crostini.  We had Piedmontese Beef Medallions with Sage Truffle Butter over Risotto tossed with Cremini mushrooms, asparagus and Black Truffle Shavings.  A Whitefish Filet that was pan-seared and topped with Cipollini onions, tomato and caper sauce served over a zucchini boat.  We also had Gnocchi Cinghiale, house made potato, ricotta and parmigiana dumplings tossed in a wild boar tomato ragu.  Of course, we also look and listen about dessert, but normally we don’t have room. 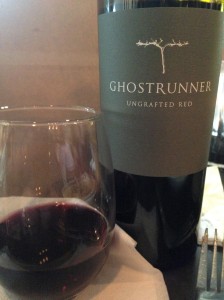 We started off with one of Ms. Yoga’s favorite wines, which in this case was a Rombauer Carneros Chardonnay 2017.  This is still a family owned and operated winery that was established in 1980, using some shared facilities and their garage and are now well into the third generation.  The winery was founded by Koerner and Joan Rombauer, and as a side note that isn’t germane to this article, Koerner’s great aunt was the author of a best-selling cookbook that is still seen today “Joy of Cooking.” This bottle of Chardonnay is from their estate as well as from a long-term growing partner vineyard also in Carneros.  The wine spent about nine months in a mix of American and French Oak, of which a third is new.  With that combination there is the tell-tale taste of vanilla, as well as peach and the mineral traces from the terroir that lifts this wine above most of the California Chardonnay wines.  We also had a bottle of Ghostrunner Ungrafted Red Lodi 2016, a proprietary red which is the only wine that they make and it is a blend of Petite Sirah, Syrah and Zinfandel.  There is not much to be found about this wine, but it was released in June 2017 and was aged in French Oak.  I keep getting impressed by the wines from Lodi, and this wine offered the deep color and the spices and the black pepper that I was looking for.  Just a great evening and we will look forward to her next visit.

A non-technical wine writer, who enjoys the moment with the wine, as much as the wine. Twitter.com/WineRaconteur Instagram/thewineraconteur Facebook/ The Wine Raconteur
View all posts by thewineraconteur →
This entry was posted in Dining, Wine and tagged California, Carneros, Chardonnay, Ghostrunner Ungrafted, Lodi, Petite Sirah, Red Blend, Rombauer Vineyards, Syrah, Zinfandel. Bookmark the permalink.