Posted on September 8, 2018 by thewineraconteur

We toured “Star Wars and the Power of Costume” at the Detroit Institute of Arts.  We weren’t sure if Ms. Yoga would be interested in seeing the exhibit, but when she said yes, we went ahead and booked the tickets for the special event.  The Detroit Institute of Arts is one of the crowning jewels in the city, and a few years back, when the city was in dire peril, the vultures were close to circling over this national treasure, but when it was discovered that it could not be touched, the city, the state, the country and dare I say the world, all breathed a sigh of relief.  I have been going to the DIA since I was in elementary school and I haven’t stopped since.  There were a couple of times that I can even remember skipping school with friends to spend the day there, and did I really admit to that?  Actually, my Bride and I have attended many museums on our travels, and I can rightfully claim that the DIA is a world-class museum, even if it tucked away in Detroit. 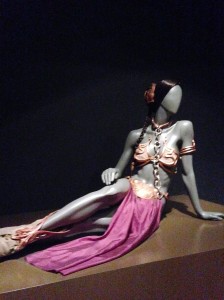 We arrived at the DIA in time for our scheduled tour, and it was a self-directed tour with a personal hand-held apparatus that acted as your personal docent.  I have to admit that my appreciation for the films are for the first three films, or episodes four, five and six.  I was there for the initial game changer known as “Star Wars: Episode IV – A New Hope.”  I would venture to say that the real interest for the three of us, was in the costumes from the first three movies, but it was interesting to see, how as the films became bigger and bigger, the costumes became much more detailed and intricate.  One of the interesting trivia facts that I took away from the exhibit, was that even from day one, there was a mandate by George Lucas that closures were to be hidden and unseen.  There were plenty of costumes seen, and not just for the humans, but there were uniforms, alien outfits, creatures and droids or robots.  One could really appreciate how tall Darth Vader, C3-P0 and Chewbacca were and how short in height were R2-D2, Ewoks and Yoda.  There were even some side references like Han Solo was costumed to evoke Gary Cooper from “High Noon.” 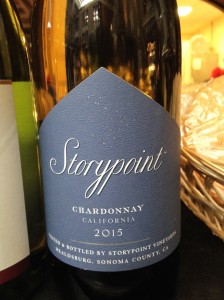 After the special exhibit we decided to go have a snack at the Kresge Court at the DIA and then look at some of the other halls.  When I was younger, the Kresge Court was actually an open-air court that was built in the near the center of the museum, it was where people could go and have coffee and a smoke, which people used to do back in the day.  My Bride always likes to remind me that she used to go there for the Breakfast with Bach events.  Now the Kresge Court is covered and safe from the elements.  There are two locations to have a quick bite in DIA, but this one is definitely the better of the two for the ambience, though some complain that it is much more expensive.  It was perfect for us, with just small plate offerings and a glass of wine.  I went and secured us a place to eat, as this room is always popular and the ladies went to place the order, they came back with drinks and sign holder with a numeral, so that the servers could bring our food to the right destination.  We ended up having glasses of Storypoint Chardonnay 2015 from California.  This was an easy to wine to drink, and when there is an offering of big production, very popular price wines offered, I usually suggest the Chardonnay, as a chilled wine is easy.  This wine was actually good, in that it tasted like a Chardonnay, the fruit had been sourced from Sonoma, Mendocino and Lake Counties, and each lot was fermented separately in a mix of Stainless Steel and French Oak.  There may not been a lot of finesse, in the production, but it hit the spot. 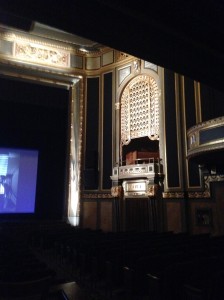 As we were getting ready to view some of the other halls, a lady that works for the DIA told us that it was raining very hard outside at the moment, a fact that we could not tell while in the Kresge Court, and she suggested that we go see a free movie that was getting ready to screen at the Detroit Film Theatre which is part of the museum.  I have to admit that for all of the years that I have been going there, I had never been to the DFT and was I amazed at the beauty of the room, the grandeur of the room is actually hidden by the fact that there is a very drab and unassuming hall and assembly area that one sees first.   There was a balcony and some private viewing boxes on both sides of the stage and with all the gilt-work, it made me remember the glory days of attending first-run theaters in Downtown Detroit as a kid.  We saw another Sci-Fi type of movie that had cheesier sets more reminiscent of the original Star Trek television show, and one of the funniest scenes that probably could not be shot today, was that of all the men trying to remove white corpuscles off of the jumpsuit that Raquel Welch is in.  The movie was “Fantastic Voyage” and yes, I did see this movie in Downtown Detroit as a kid in 1966.

A non-technical wine writer, who enjoys the moment with the wine, as much as the wine. Twitter.com/WineRaconteur Instagram/thewineraconteur Facebook/ The Wine Raconteur
View all posts by thewineraconteur →
This entry was posted in Dining, Wine and tagged California, Chardonnay, Lake County, Mendocino County, Sonoma County, Storypoint. Bookmark the permalink.

4 Responses to Leia to Raquel