Posted on August 29, 2018 by thewineraconteur

Traditionally when my Favorite Daughter is in town, we take her to one of her prized memories of restaurants in Dearborn, Michigan where she grew up.  Alas the town is not the same, the so-called leaders of the community are letting the city be cobbled every which way according to who has the money and the current political sway.  All the grand places that were famous in Dearborn are gone, either to be torn down to be replaced by a Burger King, or to create new office campuses, because a new generation of workers cannot work in an office environment, or other similar tragedies.  She went to some of the ethnic eateries that have survived, with some of her cousins and friends, but I want to take her to potential new places that perchance live up to her memories of old.  You can’t really go back home.

We decided to meet at Mint 29, a very new restaurant that I had heard did a good job, even though I haven’t lived in Dearborn for ages, I still have eyes and ears in plenty of locations.  For the longest time while I was in Dearborn, I considered myself an amateur modern historian of the city, so I was surprised to find out that while I knew that Mint 29 was in the old Dearborn Music store, I did not realize that the building originally held a bank.  The structure was built in 1929 and when the walls were being gutted they found some old coins dated 1929, hence the name of the restaurant.  The restaurant has that “hip” Chicago feel to it with the exposed brick-work and the open un-finished ceiling which I feel makes a restaurant louder, but I guess the current trend makers prefer that, so real conversations are kept to a minimum.  Mint 29 is a fusion style restaurant, in that the cuisine is not of one area.  We ended up getting there a little early, so we had gone through one order of an appetizer and had to repeat it when my Favorite Daughter showed up.  We had the Blini Smoked Salmon on French Potato Pancakes with Crème Fraiche and Black Caviar.   My daughter had just come from another restaurant, so she was not hungry at all, but I guess she wanted to see us, so that counts for a few points, but we did make her nibble and drink.  My Bride had the Tuxedo Seared Yellow-fin Tuna, which was black and white sesame encrusted, served with spicy seaweed sesame salad, edamame relish and sweet soy sauce.  Being the more provincial guy that I am, I had the Mediterranean Sea Bass, a pan seared Bronzini with shaved fennel in a Lemon Beurre Blanc Sauce.  The food was excellent and definitely worth a repeat visit. 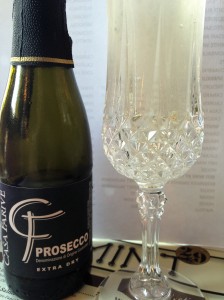 It is rather unique that none of our children drink wine, but we plod along anyways.  My Bride started off with a split of Cantine Vedova Casa Farive Prosecco-Superiore Extra Dry NV.   Here is a wine that would have been made with the Glera grape, but since it is from such a fine delineated area it can call the grape Prosecco, since the rules and laws changed in Italy.  This is a wine made from the Charmat Method and it was very tasty.  The wine had small bubbles, a light straw yellow color and a faint floral nose to it, and since it was Extra Dry compared to a Brut, I enjoyed the finish a bit more.  We ended up having a robust red wine for our entrée dishes.   We had a bottle of wine from Paoletti Winery in Calistoga, Napa Valley.   Paoletti Winery has thirty-six acres in Calistoga and their first release was in 1994, so the wine we were enjoying was from their Twentieth Anniversary and this is the second time that we have had this wine while out.  Their Piccolo Cru 2014 was all fruit from their own estate and it was a Bordeaux blend with half of the wine being Cabernet Sauvignon and then Merlot, Malbec, Petit Verdot and Cabernet Franc.  The total time for the production of this wine was about sixteen months and it was delightful, with all the qualities that I expect from a Claret.  Thankfully the rules have changed in Michigan and if you don’t finish a bottle with your meal they will recork it for you and put it in a closed bag, so you can take it home with you.  We are not exactly sure when the next time we will all get together.