Posted on April 25, 2018 by thewineraconteur

As strange as it may sound, I keep going to wine tastings whenever I get a chance.  Some are organized and some are rather casual, almost done by the seat of the pants.  I have been to wineries where the tasting rooms can be described the same way, so I just go with the flow.  I am there for the discovery of wines, the ambience of the room can enhance the moment, but it really does eventually come down to the wines.  While I was at The Fine Wine Source in Livonia, Michigan I tasted a Sauvignon Blanc wine that really got me excited.  I know that it may sound unusual, but it really made my day. 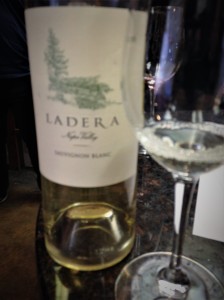 Pat and Anne Stotesbery bought their first Napa Valley mountain vineyard in 1996 in the Mount Veeder district, with the intent of growing grapes to sell to other wineries.  The following year they bought a second mountain vineyard, Lone Canyon, and became wine makers.  In 1998 they had their first non-commercial vintage of one-hundred cases of Cabernet Sauvignon.  The following year with the addition of the Lone Canyon vineyard they had their first commercial vintage of six-hundred cases of Cabernet Sauvignon.  They named their winery Ladera Vineyards which means hillside or slope in both Italian and Spanish.  In 2000 they acquired an eighty-two-acre vineyard in Howell Mountain.  In 2016 they sold the Lone Canyon and Mount Veeder properties, though with the right to access some of the fruit, as they are planning on retiring.  Wine making is a full-time occupation and they actually closed on Sundays to allow themselves a day of rest each week.

The Ladera Sauvignon Blanc 2016 was the wine I tasted and bought, as I was that impressed with the wine.  This wine is a blend of three different clones of Sauvignon Blanc; Clone #1, Liparita and Sauvignon Musque.  Since they are a mountain vineyard the fruit was harvested in the evening to keep it cool.  The fruit was whole cluster pressed and cool settled for twenty-four hours.  Then the juice was aged Sur Lie in both Stainless Steel, which was seventy-six percent, and French Oak of which nine percent was new; for six months.  The wine had a perfume nose that belied just the typical grapefruit and citrus that one expects from this grape in the New World, with a soft light color and a very long finish, which really impressed me.  I usually like a Sauvignon Blanc in the summer to make the hot days more bearable, but this wine is not to be quaffed, but more to be enjoyed with like-minded friends.

A non-technical wine writer, who enjoys the moment with the wine, as much as the wine. Twitter.com/WineRaconteur Instagram/thewineraconteur Facebook/ The Wine Raconteur
View all posts by thewineraconteur →
This entry was posted in Wine and tagged California, Ladera Vineyards, Napa Valley, Sauvignon Blanc. Bookmark the permalink.