Posted on April 3, 2018 by thewineraconteur

I got home a couple days earlier than my Bride and I started getting back in to a routine.  There was some writing to catch up on, my correspondence is still lagging, some domestic chores because we split up the duties and of course that four letter word – work.  As I look upon that I am reminded of one of my club members favorite quotes “work is the curse of the drinking class.”  The moment my Bride landed from her side excursion to see her girl friend there was a real flurry of activity, as she was preparing for the monthly dinner to celebrate the birthdays in the month of March. 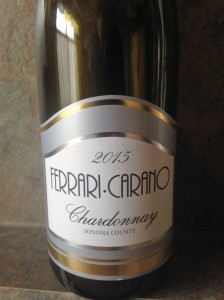 She jumped right back into her catering mode, as if she had never been away.  I think that she revels in preparing big dinner parties, as opposed to just making dinner for the two of us.  She also keeps track of the likes and dislikes of the guests and tries to offer dishes that will appeal to the crowd.  She also tries to rotate the dishes so that there is a change of pace.  Rather than always making her acclaimed Caesar Salad from scratch, she will offer a tossed salad with assorted dressings, like she recently did.  This time around she made sautéed chicken and a pork tenderloin.  She will also change up the vegetables.  About the only thing that she doesn’t have any control over is the desserts, because that is usually what is brought by the guests. 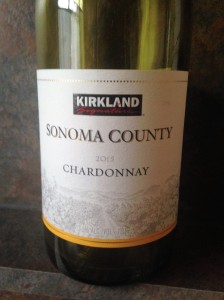 It was kind of a white wine menu for the day and there were not any wine lovers in attendance, so we went more casual.  It was just the two of us that were drinking wine, so I decided not to raid the cellar and just grab from the everyday section.   I really think that my Bride must have her photo on the walls at Costco headquarters, because she is an avid fan of their Kirkland Signature Sonoma County Chardonnay 2015.  This is just a good workhorse of a wine, one dimensional with no artistry or finesse, but infinitely better than a regional California jug wine.  I also opened up a bottle of Ferrari-Carano Sonoma County Chardonnay 2015.  Ferrari-Carano has been around since 1985 and they are located in the Dry Creek Valley in Sonoma County.  They have nineteen estate vineyards in four appellations in the county.  The fruit for their basic wine comes from the Alexander Valley, Dry Creek Valley, Russian River Valley and Carneros.  The juice was aged Sur Lie for a couple of months and then blended using French Oak, of which twenty-three percent were new, and then aged in the bottle for about six months prior to release.  The Ferrari-Carano is about twice the price of the Kirkland and from the same county, but it is a far superior wine for the money, in my opinion, though my Bride is still perfectly happy with her every day wine.

A non-technical wine writer, who enjoys the moment with the wine, as much as the wine. Twitter.com/WineRaconteur Instagram/thewineraconteur Facebook/ The Wine Raconteur
View all posts by thewineraconteur →
This entry was posted in Dining, Wine and tagged California, Chardonnay, Ferrari-Carano, Kirkland Signature, Sonoma County. Bookmark the permalink.