Posted on December 2, 2017 by thewineraconteur

As the race to get everything done for the Thanksgiving dinner, there is always the Joker in the deck. After getting the turkeys out of the roasters and getting most of the side dishes out of the oven, it was time to do the tenderloin. Our family from Kentucky brought up the largest tenderloin that I have ever seen. I mean it was almost large enough to feed the entire grouping with out the turkeys. My Bride’s Sister had marinated the tenderloin before bringing it to the house in a massive bag, that a turkey could have fit in, as I am trying to give you a visual of the size. Most of the crowd vacated the confines of the kitchen to allow us more room. The Chef and the Sous-chef and me, the carver. 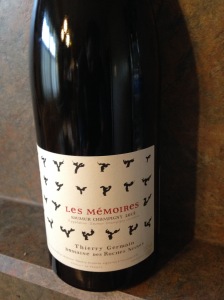 The meat was so long and thick that the broiler was not doing it justice, we were afraid that it might char the outer without getting any real reading from the meat thermometer. My Sister-in-Law suggested that we get a Sous-vide system, because she has had great results from hers and she thought it would be a great item for us. Since we didn’t have the system, the common consensus was that I should butterfly the tenderloin. Now before you all start grimacing and questioning our sanity, after cutting the meat that way, it was still thicker than the average tenderloin that we make at the house. So, the two tenderloins cooked perfectly to a medium-rare consistency, with some rare slices for those carnivores that prefer it that way. The meat finished by the time the turkeys were carved and plated and dinner went off perfectly, and major kudos to the Chef and Sous-chef. With that many people for dinner, all of the platters of food were placed on the island in the kitchen, and everyone grabbed a plate and made their dinner plate and found a seat somewhere to eat. After everyone had seconds and some had thirds, the island was cleared and all the desserts were brought out, including a birthday cake for the November honorees. I was so full, that I didn’t even think about pairing wines with dessert. 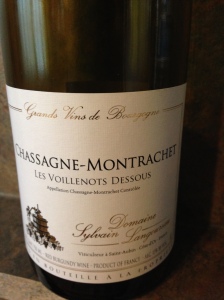 With the many wines that were opened for the evening, we eventually got to some red wines. I never know what will be opened until the moment arises and I guess that is the beauty of having a cellar. Two of the reds that we opened, were the wines that she bought here during her last visit when I took her to a special wine shop and she was eager to try those wines. The two wines that she chose for the evening were rather unique and I think she must have been listening to her sister gush a bit about Cabernet Franc. Thierry Germain Domaine des Roches Neuves Les Memoires Saumur Champigny 2015. Thierry Germain was originally from Bordeaux, but he has found a new life in the Loire Valley. While Cabernet Franc is one of the grapes used in Bordeaux it shines in Saumur de Champigny and the winery is bio-dynamic and they only use used oak barrels. Les Memoires is from a separate vineyard plot that was first planted with Cabernet Franc in 1904 near Dampierre, so the vines are quite mature. The wine is fermented for ten to fifteen days, before it is aged for twelve months in oak and then it is bottled and rests for an additional six months before it is sold. The other wine that she really wanted to try was Domaine Sylvain Langoureau Chassagne-Montrachet “Les Voillenots Dessous” 2015 fit the bill nicely. A nice affordable Red Burgundy. Domaine Sylvain Langoureau is a husband and wife team that are making wines in one of the most famous wine regions in the world and of course the French call them garagiste, but I think Le Pin was also considered that in the beginning. This is a couple who are completely hands on, and all the work is by their own toil and they are working with one of the most finicky grapes and Pinot Noir is the grape of Burgundy for red wines. Les Voillenots is another lieux-dits site or locality that some consider should get official recognition in Chassagne-Montrachet, but the wheels turn very slowly for change in that part of the world. While there were other reds for the evening these two had the most interest and they were wonderful, just I thought a bit young, but they worked wonderfully. There was still so much food, that an invitation was proffered that everyone return the next night for left-overs, because of course most of them were going out shopping on Black Friday.

2 Responses to Reds for Thanksgiving