Posted on November 14, 2017 by thewineraconteur

The guest speaker for Klinker Brick Winery at D. Vine Fine Wines in Livonia was Jordan Painter, who is the Regional Manager for the winery and he was a good soul, as his name was printed on the sheets as Justin Painter. He was explaining how all of the classic structures in Lodi were built using klinker bricks which are heavier and stouter than the average building brick and that the name was an homage to the history of the area. He was sharing the discussions that evening with Lee Hershey who usually hosts the wine tastings. He was very passionate about the products and could quote all the production information without a cheat sheet and he seemed to be enjoying himself that night. 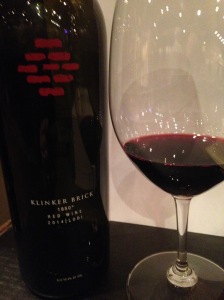 The fifth wine of the evening was Klinker Brick Winery 1850° 2014. The name of the wine refers to the temperature required to fire up klinker bricks when being produced. This wine was a blend of sixty percent Cabernet Sauvignon, thirty percent Petite Sirah and the balance was Old Vine Zinfandel. This wine was aged for twenty-two months in American Oak and produced a wine with long legs, a peppery spice to the tongue and a long finish. Even with only ten percent of the wine being Zinfandel, it added a nuance that I rarely encounter, and it was delicious.

The last wine of the evening was their “reserve” wine that in the first couple of years caused the winemaker grief, because it was so feisty from day one. The Klinker Brick Winery “Old Ghost” Old Vine Zinfandel 2014 was from their oldest plots and most of the vines were over one-hundred years of age. The fruit harvested from these plots were the smallest in ratio of ton to acre and there were looking for the smallest berries to use with “more skin to the flesh.” Even the label had a rather ethereal feel to it, as it was a blind embossed image of an old grape vine. This wine was aged for twenty-two months in a mix of American and French Oak barrels. This wine really won me over for the enjoyment of a well-made Zinfandel. While they are no production numbers for the wines, this wine is limited in sales to one case or twelve bottles per customer and I can understand their request. A delightful evening and a chance for this old war-horse to reconsider his thoughts about Zinfandel.

A non-technical wine writer, who enjoys the moment with the wine, as much as the wine. Twitter.com/WineRaconteur Instagram/thewineraconteur Facebook/ The Wine Raconteur
View all posts by thewineraconteur →
This entry was posted in Uncategorized and tagged 1850°, Cabernet Sauvignon, California, Klinker Brick Winery, Lodi, Lodi-Mokelumne River, Old Ghost, Old Vine Zinfandel, Petite Sirah. Bookmark the permalink.