Posted on October 21, 2017 by thewineraconteur

Hockey and wine, go together, just ask Tim Gleason #6 and Cam Ward #30 who are partners with Jason Earnest in Vineyard 36 from Napa Valley. The two hockey players combined their jersey numbers to create the name of the winery. They both were introduced to wine having dinners with other fellow hockey players and they really enjoyed what they were drinking, and they took the next big step and they went to where the action is, in Napa Valley. Jason Earnest the third partner in the equation comes from a financial background, so they were all neophytes to winemaking, but they had great enthusiasm. They hired winemaker David Tate from Montebello for his expertise and they were off and running, or should I say skating. 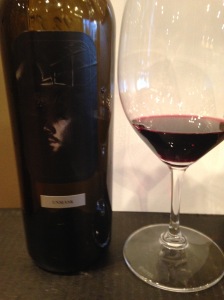 I went to a wine tasting at D. Vine Wine in Livonia along with many others to hear what Jason Earnest had to say about the wines and the winery. The first wine that was discussed and tasted was Vineyard 36 Unmask Red Wine 2015. It was described as a Rhone style, perhaps because it was three quarters Syrah. The other grapes that were blended in with the Syrah was Zinfandel, Merlot and Mourvedre. The wine was aged for twenty-four months in neutral French Oak barrels. I found the wine to be very mellow and even with all that Syrah, I could taste some of the Zin permeate the flavor and this would be a great pairing with a steak. The black and white label features one the icemen without his head covering looking rather intense at the game he is watching.

The Vineyard 36 Cross Check Red Wine 2015 was the next wine and it is also from Napa Valley. As you notice the hockey terms are apparent in the wines. This wine label is also in black and white and shows one of the partners rather beaten up, and Jason showed us the actual photograph in color and it was rather graphic and the final artwork renders it much more saleable in my humble opinion. This wine was seventy-five percent Petite Sirah with twenty percent Zinfandel and the rest was Petite Verdot. This wine was also aged for twenty-four months in neutral French oak. I found that the fruit was much more prevalent and forward in this wine and I think that it would be better with a roast turkey with the holiday coming up.

A non-technical wine writer, who enjoys the moment with the wine, as much as the wine. Twitter.com/WineRaconteur Instagram/thewineraconteur Facebook/ The Wine Raconteur
View all posts by thewineraconteur →
This entry was posted in Wine and tagged California, Cross Check, Merlot, Mourvedre, Napa Valley, Petite Sirah, Petite Verdot, Syrah, Unmask, Vineyard 36, Zinfandel. Bookmark the permalink.