Posted on October 17, 2017 by thewineraconteur

After wine shopping we had really worked up an appetite and this was going to be our last meal with my Sister-in-Law before she went home. We went to the restaurant that is known in the metro area as the power breakfast location, in fact the breakfasts are so famous that some of the dishes appear throughout the day on the menu, but since we were there for a Sunday brunch we didn’t have to worry. 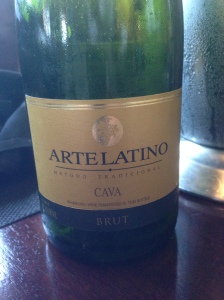 My Sister-in-Law opted more a lunch item in that she had Macadamia crusted Michigan Rainbow Trout with Coconut Sticky Rice, Micro Cilantro and a Cucumber-Mango Salsa. Michigan Rainbow Trout is not something that she can get at home for her and she was showing her allegiance to the state. My Bride ordered one of the specials that are written on the blackboards for the day She had the Shrimp and Grits with Andouille sausage, tomatoes, scallions and Cheddar cheese as it reminded her of New Orleans. I also went with the New Orleans flavor and got a special Eggs Benedict. This one was made with Lamb sausage, with a Spinach, Brussel Sprouts, Baby Kale salad and topped with a Rosemary Hollandaise sauce.

Instead of ordering the house Mimosas we made our own by ordering a bottle of bubbly and a carafe of fresh orange juice. We had a bottle of Jaume Serra Arte Latino Cava Brut NV. I thought it was a better choice compared to some of the bulk sparkling wines that we sometimes encounter for Mimosas. This Cava wine from Catalonia was made in the Metodo Tradiccional as the Champagne makers in France back in the Seventies started their campaign to eradicate the word Champagne from any label that was not from the Champagne region. It is made in the classic method only with Cava the classic grapes are Xarel-lo, Macabeo and Parellada and when made from a good house the bubbles are tiny and continuous. This wine took twelve months to finish off its Secondary Fermentation and for an affordable bottle it was quite good, as I tried some first before I added the orange juice. My Bride took her sister to the airport and we look forward to seeing her and her family along with everyone else for the traditional Thanksgiving Dinner.

A non-technical wine writer, who enjoys the moment with the wine, as much as the wine. Twitter.com/WineRaconteur Instagram/thewineraconteur Facebook/ The Wine Raconteur
View all posts by thewineraconteur →
This entry was posted in Dining, Wine and tagged Arte Latino, Brut, Catalonia, Cava, Jaume Serra, Macabeo, Metodo Tradiccional, Parellada, Spain, Xarel-lo. Bookmark the permalink.