Posted on October 11, 2017 by thewineraconteur

We arrived at the hall, and I looked for our table assignment and then it dawned on me, the theme of the wedding colors – The Detroit Tigers. That is what I get for being a jock, and I am far from one, as the Navy and Orange triggered my brain finally when I saw that we were sitting in Section 104 and at each place setting was a can of Coca Cola, a box of Cracker Jacks and a baseball shaped sign announcing the nuptials. I guess I was the only one that did not put everything in place in my mind, in fact some of the wedding pictures were photographed at Comerica Park and I began by typing Tiger Stadium, eventually I will get with what is going on in the world. 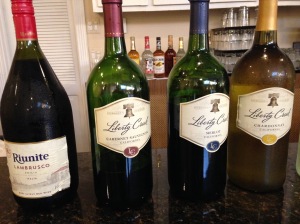 Our “section” was very close to the Bridal table, as the Mother of the Bride and her Sister, are considered to be sisters to my Bride and her sisters. It was quite the family event of the year. I mean my Bride considers the Bride of the moment more as a niece than a cousin and so do her other sisters. After the introductions of the new married couple the room was set up for the buffet dinner and the “sections” were called up for bat to make their plates and dine. It was a nice set up with an assortment of salads and the peppers that one could add to the salad had some great zing to them. There were three different options of meat as well as other sides. I am always concerned with most catering companies, as I feel that they rely more on MSG than on quality cooking, but I did not have any problems, so I was very happy. The only complaint that I heard about was that the Groom and a couple of other guests had certain dietary concerns and the hall messed up, even though it was in the contract, and I thought that was poor service. After the dining was finished and the cake was carved up, it was time for the special dances and then dancing for the guests as well. Each guest was asked to list a special song that they wanted to have played that evening and my Bride and I got a chance to swing to “You Make Me Feel So Young,” one of our theme songs from our wedding. 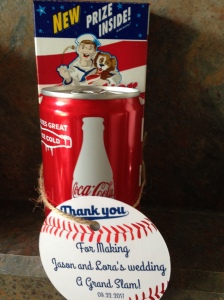 My one constant that I find about catering halls and companies is that they go out of their way to find the most profitable wines for themselves at the expense of those that try to enjoy wine. The wine selection was Liberty Creek Cabernet Sauvignon, Merlot and Chardonnay and all were Non-vintage and what I would classify as jug-wine. These are all massed produced California wines and I tried the Cabernet Sauvignon and the Chardonnay and they both were much sweeter than I had expected, but perhaps that is what is wanted by young couples at weddings. I then tried a glass of Riunite Lambrusco NV from my youth that is made in the Emilia-Romagna district of Italy and it was much sweeter than I recalled and it didn’t have the sparkling natural effervescence that I recall back in the day. While we did not drink much wine, others were enjoying it and the wedding was a success, and at the end of the day that is what mattered.

A non-technical wine writer, who enjoys the moment with the wine, as much as the wine. Twitter.com/WineRaconteur Instagram/thewineraconteur Facebook/ The Wine Raconteur
View all posts by thewineraconteur →
This entry was posted in Dining, Wine and tagged Cabernet Sauvignon, California, Chardonnay, Emilia-Romagna, Italy, Lambrusco, Liberty Creek Winery, Merlot, Riunite. Bookmark the permalink.

2 Responses to The Wedding Reception