Posted on September 27, 2017 by thewineraconteur

As the summer season slowly turns over to autumn I guess everyone likes to extend the moment when possible. This happened very recently when everyone was called for an impromptu get-together at one of the houses. This sister has an inground pool and they wanted to use it once more before they would have to winterize it. That is the problem with a pool in Michigan, the season is a bit shorter compared to other states. My Bride was all for it, and as for me, my physique looks better in clothes than in a swim suit. 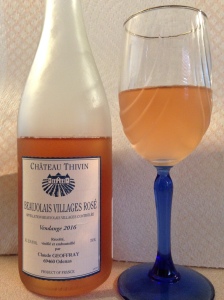 There was a whole group and my Bride went and got some of the typical foods for a barbecue. She also brought some sides as well, and so did the sister that was furnishing her house for the day, and the other sisters also brought some dishes as well. There was not a shortage of food, from the time the first game of cribbage with cheese, crackers, vegetables, dip and potato chips; but is it just me or has chip dip seemed to disappear from the horizon? There were several different types of salads and of course the entrée dishes. There was chicken, hamburgers and hot dogs and brats. Afterwards there was cake and pie and cheesecake, just like an organized picnic, in a much more hospitable situation.

Since I looked at this as a potential last hurrah of summer, there were a couple of wines that I wanted to try and this was the right type of day to try them. The first was Chateau Thivin Beaujolais Villages Rosé 2016. Chateau Thivin has been around for about six-hundred years and is in the heart of Brouilly in the Beaujolais region. This wine naturally is made from Gamay Noir a Jus Blanc and after the grapes are macerated the juice is left with the skins for a natural coloring and this fruit is from vines averaging fifty years in age. After the one day, the juice is fermented in Stainless Steel to maintain the fruit. It may have been the best Rosé I have had all year and my only complaint is why I didn’t learn of this wine sooner. The other wine that I wanted to try was a wine that we had just recently purchased at the winery and I was curious if it was the setting that made the wine so good, or if I really did enjoy it, as much as I had earlier. The Boathouse Vineyards Merlot 2012 from the Leelanau Peninsula was still absolutely right on. As much as I enjoyed the ambience of the winery and a chance meeting with the owner, the second time tasting this wine was still perfect. This wine almost single-handedly made me change my position that red wine is second to white wine in the Leelanau Peninsula. That is not to say that I have not enjoyed other reds, but here was a wine that I thought could easily compete with a Merlot wine from other parts of the country, it was that finely crafted. It is quite a gamble for a new winemaker to take twenty-one acres of land and devote all but one percent to vinifera, and of that property half is devoted to Pinot Noir, Cabernet Franc and Merlot. The eighteen months in French Oak really allowed all the love in the growing to become apparent and we were both happy with the finished product. Here is hoping that we have a long “Indian Summer” here in Michigan before the weather changes for the next season.

A non-technical wine writer, who enjoys the moment with the wine, as much as the wine. Twitter.com/WineRaconteur Instagram/thewineraconteur Facebook/ The Wine Raconteur
View all posts by thewineraconteur →
This entry was posted in Dining, Wine and tagged Beaujolais-Villages, Boathouse Vineyards, Chateau Thivin, France, Gamay Noir a Jus, Leelanau Peninsula, Merlot, Michigan. Bookmark the permalink.