Posted on September 9, 2017 by thewineraconteur

One of our dear friends and part of my returning cast of character Ms. Yoga came up for a visit, and this time it was both personal and business in nature. Of course, I told her that her room was available and we could still slide her bill under the door when her departure date was due, yes, I am that kind of guy. Ms. Yoga is lucky though, because she gets some inside pull and her bill is always comped by a higher authority, she has an inside track on these things. The first night of her trip, we were going to go out for dinner and of course my Bride decided to make it a big event, because Ms. Yoga has not seen our grandchildren or our one son in ages, so we were off to have dinner for eight. Then the logistics of finding a venue that was about half-way between the two households, and then also a place that the grandchildren would want to eat at. 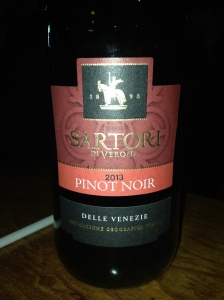 We ended up at Johnny Carino’s in Commerce Township, and I have written about this restaurant in another location, as they are a chain, albeit a much smaller chain in comparison to many of the others. The food is much better than some of the chains that I refer to as “Italian food for Americans.” I won’t go into all of the dishes that were served that evening, but suffice it to say that even with three teenagers, there was ample enough food and the desserts were large enough that they were actually shared. My Bride ordered the Grilled Citrus Salmon which was in a sweet citrus balsamic glaze with sautéed spinach and Angel Hair pasta and topped with Roma tomatoes and of course, never enough Parmesan cheese, and a side of fresh roasted vegetables. I wanted to try something different and I went with the Italian Sausage and Peppers, which were grilled with marinated peppers and onions with a Marinara sauce on a bed of roasted Rosemary potatoes, a different twist on an old classic dish that I haven’t had in ages.

Since there was only three of us having wine, we went with a bottle of Sartori di Verona Pinot Noir 2013. This wine carried the Delle Venezie IGT designation for winery of Casa Vinicola Sartori, because Pinot Noir is not an indicative grape varietal for the area, but many of the wineries have brought in some other types of grapes to grow to appease the large international consumer base that they are aiming for, and Pinot Noir is a very recognizable grape. The winery was founded in 1898 and is still family owned, but they have spread their wings beyond their traditional offerings and that is fine and the wine worked out well. Here was a classic French grape, grown in Italy and aimed at the American market, and the wine was aged in oak for twelve months, so it was not a light-weight. It had enough of the Pinot Noir flavor to pair with the dishes, but it was not stellar, but then neither was the price, even in a restaurant; and that is an important consideration in a crowd.

A non-technical wine writer, who enjoys the moment with the wine, as much as the wine. Twitter.com/WineRaconteur Instagram/thewineraconteur Facebook/ The Wine Raconteur
View all posts by thewineraconteur →
This entry was posted in Dining, Wine and tagged delle Venezie IGT, Italy, Pinot Noir, Sartori. Bookmark the permalink.