Dinner at the Dotte

Posted on July 7, 2017 by thewineraconteur

After our river cruise, the four of us went to have dinner at the Wine Dotte Bistro. I have had many lunches there, but it was the first time to have dinner there. I really enjoy the name of the establishment as it is a great play on the name of the city of Wyandotte. The restaurant is on the back side of the main street and it has a view of the waterfront and they have some outdoor seating as well, but after being out on the water, the creature comforts of air-conditioning was too inviting not to ignore. 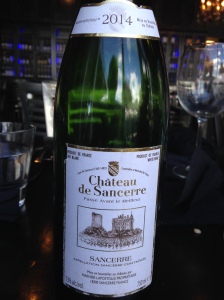 The menu offers several different dishes and a couple of specials were also offered that day. Our friend had the “Baseball Cut” Sirloin, which is a center cut topped with a Zip Sauce and vegetables, preceded by a house salad. His wife ordered one of the daily specials, the Jerk-spiced salmon and she had the soup of the day. My Bride was not hungry so she ordered an appetizer and a bowl of soup. She had the Steak Bites, which were done in a Zip Sauce with mushrooms, onions, green peppers, garlic and pita bread along with the soup, which was Tomato-Basil; and between the two sides, she had ample food. I went with the other special of the day, a version of Surf & Turf, it was three marinated lamb chops done with Chimichurri and a lobster tail with drawn butter. 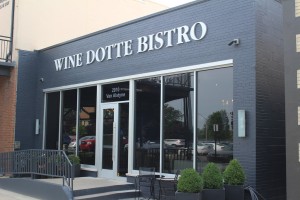 My Bride commandeered the wine list and immediately ordered a bottle of wine, even before we knew what everyone was ordering, but her selection was fine as it had been a hot and summery day. She ordered the Chateau de Sancerre 2014 from the hamlet of Sancerre in the Upper Loire region of the Loire Valley. Sancerre is famed for their white wines, which is Sauvignon Blanc and the varietal has a distinct tang there, that most Sauvignon Blanc wines do not have, and there is a bit more body and I attribute to the region. This wine is aged on the lees for six months in Stainless Steel before bottling and offers a nuance all its own. The winery was founded in 1919 by Louis-Alexander Marnier Lapostolle, whose family back in 1827 discovered liquid gold when they created Grand Marnier. The Lapostolle family has also found more accolades for their own Lapostolle wines in Chile. This is a Sancerre wine that is a little easier to find and well worth trying a different take on Sauvignon Blanc.

A non-technical wine writer, who enjoys the moment with the wine, as much as the wine. Twitter.com/WineRaconteur Instagram/thewineraconteur Facebook/ The Wine Raconteur
View all posts by thewineraconteur →
This entry was posted in Dining, Wine and tagged Chateau de Sancerre, France, Loire Valley, Sancerre, Sauvignon Blanc. Bookmark the permalink.