Posted on June 3, 2017 by thewineraconteur

Brunch is an often-maligned term, a cross between breakfast and lunch. I shudder when I think of a buffet line as it is something that just makes me uncomfortable. I prefer a nice meal that is a juxtaposition of the two meals when one can have a nice conversation during the meal, rather than trying to juggle an assortment of food and plates, watching others try to accomplish the task of piling mountains of food, trying to recoup their expenditure. We planned on going out for brunch and then maybe a matinee at the cinema, since the next day my Bride was driving out to the Upper Peninsula for a week of business meetings, so we were going to make a day of it. 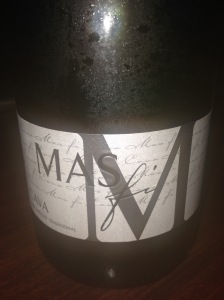 We went to one of our favorite haunts to eat when we are going out to see a film and that is Flemings Steak House, because it is convenient, though I am really a fan of independent restaurants as opposed to national chains. Flemings calls their meal the Sonoma Brunch as I guess that California evokes a mystique about cuisine. We both settled on the Filet Mignon Benedict which is their take on the classic Eggs Benedict. This dish was made with two filet medallions set on crispy potato pancakes topped with wilted arugula, poached eggs and Béarnaise Sauce. Alas, my Bride gave me one of hers, because it was saltier than she preferred and mine was perfect. In the end, we figured out that it was the potatoes are her order that were the culprit, but I overindulged and had an order and a half. While we were ordering a dessert of Crème Brulee we just mentioned about the potatoes. Much to our surprise they did not charge us for the dessert, and I told the manager that it wasn’t really necessary, because most of the meal was consumed with gusto.

We were going to have Mimosas with our meal and they brought us out a large carafe for the two of us, but we requested the classic version of just using orange juice, instead of their use of passion fruit juice, which we both find a bit overpowering; maybe it is a California thing. They use Wycliff American Champagne Brut NV, made by William Wycliff Vineyards of Modesto, California. This sparkling wine is used quite often by restaurants, as the wine is marketed to the hospitality industry and it is very easy for the help, since it has a screw cap closure. I suppose that because William Wycliff is owned by E& J Gallo Winery that the term American Champagne has been grandfathered in, as the term Champagne is now only recognized as coming from France. The wine is made in the bulk Charmat Method and the typical grapes used are Pinot Noir, Chardonnay and Pinot Meunier. The Mimosas weren’t working for me, so I was rebellious and order a glass of something else bubbly. My choice was excellent, because the tiny little bubbles maintained a steady stream until the flute was emptied. I had a glass of Mas Fi Cava Brut from Penedes, Spain and I was just a happy guy. In the late Nineteenth Century, the Masach family started making wines at their Vilafranca del Penedes, and they started marketing their Cava in 1977. This wine was made in the Methode Traditional with a blend of Xarel-lo, Macabeo and Parellada grapes and it is aged an additional ten months after the secondary fermentation. Can I say that it was delightful once again? During our meal, we checked the local theaters for a film to see and we couldn’t find one, so my Bride had a Plan B. We went home and worked on the lawn, and I can attest that even with the able assistance of two lawn services, we still grow the best dirt you have ever seen.