I went to another wine tasting, and this one featured Christine Mouton Bertoli, who along with her husband who was not in attendance, acquired Domaine Sainte Cecile du Parc in 2005 just outside of Pezenas in the Languedoc. I really enjoy a wine tasting from a single estate to see what is being offered and this tasting was once again at D.wine Fine Wines. Christine was charming in her approach to wine making and one could see the passion that she has, even as she stressed that winemaking is not an easy endeavor. 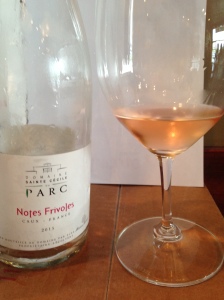 The estate encompasses ten hectares of vineyards encircling the winery, so every vine is within walking distance and that they use small baskets during harvest, so as not to damage the fruit, and the harvest goes for a couple of weeks, as they pick the fruit individually as each cluster ripens. The vineyard was replanted in high-density rows, which is not the norm for the Languedoc, but is quite common in other areas of France. The 2013 vintage of Domaine Sainte Cecile du Parc will carry the Agriculture Biologique label, which means they have met the standards to be fully organic. While the art of winemaking is hard work, there is a bit of whimsy as they have taken the name of Sainte Cecile to heart, as Sainte Cecile is the Patron Saint of Music, so all the wines have musical associations.

The first wine of the evening was Domaine Ste. Cecile du Parc Notes Frivoles Rosé 2015, and here is the first example of the music theme as the name of the wine means Frivolous Notes, and Christine stressed that the wine was not frivolous, but the wine should be enjoyed capriciously. The wine is a blend of Grenache, Syrah, Carignan and Cabernet Franc and began first in concrete and then was aged in Stainless Steel for eight months. It was rather intriguing to hear some of the audience kind of gasp when they heard about using concrete, but their fears were allayed as Christine explained about the concrete vats. The wine carries the IGP Pays de Caux which is a subset of the IGP Pays d’Oc which covers most of the Languedoc-Roussillon region. The wine had a pretty pink shade in the glass, though the wine shop should have opened the bottles a little sooner to let the wine breathe. After I allowed the wine a few minutes of swirling in the glass it was a nice easy glass to drink and would be perfect to enjoy in the weather we are now approaching.