Posted on April 28, 2017 by thewineraconteur

Mikette is a relatively new French restaurant in a strip center away from the downtown area of Ann Arbor. A couple of the other bloggers that I follow have mentioned it, and I am looking forward to trying it, as they tout themselves as “a taste of Southern France in Ann Arbor.” The other evening my Bride abandoned me as she was attending a fund raiser with one of her friends and a co-worker and there were only two tickets, so I was definitely odd man out. My Bride asked me if there was any place I could recommend for them to stop off afterwards for a glass of wine and perhaps a quick bite, because they were not sure of what to expect at the fund raiser. 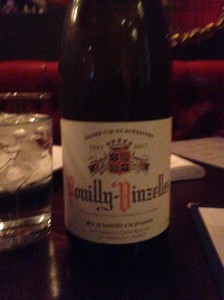 I suggested Mikette as it is a place that I want to try and I would let my Bride test the waters first. So off they went, leaving me on the threshold watching them drive off together. After the fund raiser, which was kind of a business-related event, they found themselves at the restaurant and they were just going to have a quick bite and some wine. Her friend ordered Crab Cakes which were made from jumbo lump crab and accompanied with frisee and Old Bay Remoulade. My Bride had an order of Ratatouille, the classic dish of Provencal vegetables with olives, goat cheese and crostini. I think women tend to eat lighter when they are together, because they just want to talk and catch up on things. 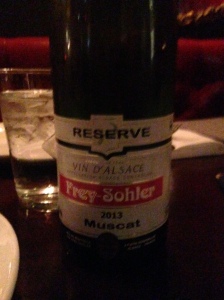 Mikette has a small, but tight wine list as per the wine authority (My Bride) and when I looked at her slightly blurry photos, which she claims is because her phone is older than mine, there were a couple of interesting wines that were not the run of the mill choices. Her friend prefers wines that are on the sweeter side, so my Bride suggested Frey-Sohler Muscat Reserve 2013 from the Alsace region of France. The Muscat grape is one of the oldest recorded grapes in history and there are many variations of the grape over the years. My Bride used her intuition to decide that the Muscat grape was sweeter and that the Alsace region is more akin to Germany, and hence the wine should be on the sweeter side, though it was still a bit dry for her friend, but I give my Bride kudos for her thought process and without seeing all of the wines on the list, I may have suggested the same wine. My Bride chose for her own wine La Cave des Grands Cru Blancs Pouilly-Vinzelles 2015, which is grown by a group of farmers that established a cooperative in 1929. Pouilly-Vinzelles is a sub appellation of the Maconnais, which is part of the Burgundy region. Pouilly-Vinzelles may sound like its neighbor Pouilly-Fuisse, which has its own appellation and much more famous, hence the appending of the village name of Pouilly. The limestone hills of the region give this Chardonnay wine a unique taste of terroir and it is aged in oak to add more flavor. I think that my Bride did a fine job and now I really want to go to Mikette to try it out for myself.

A non-technical wine writer, who enjoys the moment with the wine, as much as the wine. Twitter.com/WineRaconteur Instagram/thewineraconteur Facebook/ The Wine Raconteur
View all posts by thewineraconteur →
This entry was posted in Dining, Wine and tagged Alsace, Chardonnay, France, Frey-Sohler, La Cave des Grands Cru Blancs, Maconnaise, Muscat, Pouilly-Vinzelles. Bookmark the permalink.