Posted on April 26, 2017 by thewineraconteur

It was another meeting of my dinner club and I was bringing a lot of items to the meeting in the pouring rain. It always seems to be that way, when I have way too much to carry in my current position with the club. Thankfully The Courthouse Grille is close to my home, as some of the members were complaining that due to the weather, their commute was twice the time of a normal trip. I also thought of my Bride who had to travel quite the distance that evening as she was having dinner with some of her former co-workers and they have been meeting monthly for the last couple of years. 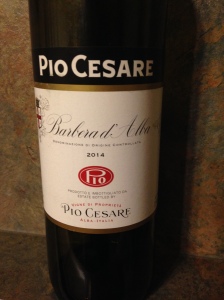 My club meets often at The Courthouse Grille and I have written about this venue many times, because they have several private dining rooms that fit our requirements very well. With the average meeting of thirty men, we need a room off to ourselves to conduct the sessions. Most of the venues that we meet at, only offer us a choice of three different entrée dishes, but here we have the choice of seven different plates, along with a salad and dessert. Normally I have an Italian dish, as that is what they are known for, but the last couple of times there, I was visually impressed with their New York Strip steak, not an item that I order, or even buy for the home. I have to admit that it was quite a nice change of pace, as it was prepared to my request of medium rare and it came with a whole grain mustard cream sauce that had a nice flavor.

We are still in the midst of a one year experiment, each meeting three members are the host for the evening and then for the rest of the year they get to enjoy their meals on someone else’s dime. The experiment revolves around the bar tab, that some members complained about, since they do not drink and feel that it is onerous for them, I think that is rather petty, because even if people came to my home for dinner, I would have their beverage of choice on hand even if I did not drink it. A couple of us have come up with a Plan B to combat this, since we have to pay for our own drinks, what we do is buy a bottle of wine to share among us, that will be far more interesting compared to the wines that are normally offered by the glass. If we were not paying for our drinks as before, we would accept the wines from the bar, but I guess that some will rely on my choice and try a wine that they would not try otherwise and when you split the bottle up, it is not that much more expensive than a bar wine. The wine that we had was Pio Cesare Barbera d’Alba DOC 2014. Pio Cesare has been making wines since 1881 and they are famed for their Barolo and Barbaresca wines from the Piedmont region of Italy, and I have had their Barolo and this was a chance to try their Barbera and since they are situated in Alba, it was a natural choice. Barbera d’Alba is an important DOC for the Piedmont and the cellars of Pio Cesare have barrels of all their wines aging in walls that date back to the Roman days. While the DOC laws for this wine allow for some blending, this wine is pure Barbera and it was aged for twelve months in French Oak to tame the wine some. By the end of the meal, the wine was really opening up, as it was quite tight on the initial tasting and to be truthful, this wine was imbibed way too soon. I think that at least five years would have been the ideal time to uncork this wine, but alas, most restaurants that even carry better wines do not have that luxury of cellaring wines that long. It sure beat any of the bar wines offered that evening.

A non-technical wine writer, who enjoys the moment with the wine, as much as the wine. Twitter.com/WineRaconteur Instagram/thewineraconteur Facebook/ The Wine Raconteur
View all posts by thewineraconteur →
This entry was posted in Dining, Wine and tagged Barbera, Barbera D'Alba, Italy, Piedmont, Pio Cesare. Bookmark the permalink.

1 Response to Another Barbera