Posted on April 14, 2017 by thewineraconteur

I remember the day that we were going to meet another couple for dinner at a restaurant called Camp Ticonderoga, that I had never heard of, but we were game for something different. The funny thing was that I kept singing and thinking of a song from before I was a teenager by Allan Sherman that went “Hello Muddah, hello Faddah. Here I am at Camp Grenada. Camp is very entertaining. And they say we’ll have some fun if it stops raining.” When I saw the note on the back of the label, I began singing it again. I know that it is silly, but it is amazing what the brain will think of. 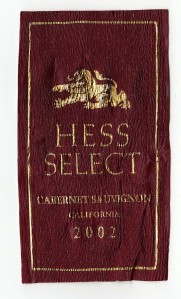 Camp Ticonderoga was the first of this chain’s offbeat restaurants geared I guess more to the generation after me, but it is fun. I think that they have four restaurants and since going to the Camp, I have been to their restaurant that is closer to my house called Deadwood Bar & Grill that I have mentioned before. Even though they are a chain, each restaurant has a different name, but the concept is the same. A rustic cabin structure with pool tables and “road-kill” entrees. They offer some game dishes, along with the usual bar food and it is really better than most of this ilk. We started off with their “Wild Thang” which has spicy venison sausage, rabbit ravioli, duck tenders, whitefish pate and barbecued buffalo balls. My Bride had the Potato Chip Walleye topped with Monterey Jack and cheddar cheese, which is then baked with a potato chip crust, served with red skin potatoes and corn bread. I had the Buffaloaf, which was too slabs of buffalo meat loaf served open face on white bread covered with buffalo gravy, grilled onions and mushrooms. Afterwards we all had the warm chocolate chip cookies that I guess they are always baking.

As for a beverage that goes with both, from a short wine list that they offered at the time, we had a bottle of Hess Select Cabernet Sauvignon 2002. This wine is from the Hess Family Estates and not the Hess Collection which is their flagship wines. The Hess Select wines carry a California designation, while the Collection is from Napa Valley. In fact, when we were at the winery, I don’t even remember being offered anything but the Collection, which I do not find often here, but the Select can be found quite readily and it is a safe bet, even with road-kill.

A non-technical wine writer, who enjoys the moment with the wine, as much as the wine. Twitter.com/WineRaconteur Instagram/thewineraconteur Facebook/ The Wine Raconteur
View all posts by thewineraconteur →
This entry was posted in Dining, Wine and tagged Cabernet Sauvignon, California, Hess Family Estates, Hess Select. Bookmark the permalink.