Posted on February 11, 2017 by thewineraconteur

Marche Bacchus is a wine shop, a wine bar and a French Bistro that overlooks a small lake populated with black swans in a residential section of Las Vegas, which is in the middle of the desert. Since we were trying to maintain some semblance of Michigan time while we were visiting the children and grandchildren, an early dinner was around our lunch time, because we were saving our dinner times to spend with the family. It is amazing how we sometimes could sneak in an appreciation of wines during our days, while waiting for the grandchildren to get out of school. Since we were staying at a casino in the Summerlin district of Las Vegas to be near the families, we made a short trip north about ten minutes away and ended up in the Desert Shores community and I really thought that we had made a mistake. We drove into a residential area and made a turn and there was a small office complex and our destination. 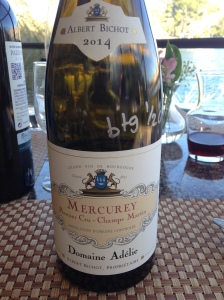 I have to say that the wine shop was very impressive and I could have gotten totally carried away and spent all of the money earmarked for the trip and then some additional funds. Thankfully I had the keeper of the treasury alongside of me and she knew what was going through my mind. I mean there in one of the wine cellar lockers were bottles of Lafite and even a Petrus, that one bottle that always calls my name, as I never had the chance to try it, and the odds are at this point in my life that I will not. As I meandered around the bins of wine, I discovered that for a corkage fee of ten dollars, I could take a retail bottle into the restaurant and have it with dinner, but we refrained, and that Petrus was like a Siren calling me for the grandest lunch in my life. We were seated for lunch at a window-side table to enjoy the lakefront and my Bride was trying to figure out, if we could afford to move here, and I don’t think so, much to the chagrin of the families in town. We got down to more realistic goals and decided to begin our meal, by sharing an order of roasted Foie Gras with poached fruit, arugula and a Port wine reduction. I guess we may have been the first customers that ever-ordered Foie Gras from our waitress, as she had no idea that the restaurant had Sauternes, because it was not on the regular wine carte, so I had to ask for a dessert menu to find a wine to pair with our appetizer. I must say that, believe it or not, we were trying to eat “light” for lunch and my Bride ordered grilled Rosemary Chicken and Asparagus Salad with oven-dried tomatoes, olives, bacon, red onions with a Citrus Vinaigrette. I looked at the menu and decided that I had to try something that I hardly ever have, as most of the time they tend to disagree with me, I was going to have a hot dog. Now I grew up in Detroit, the world center of Coney Islands, and for me there is only Lafayette Coney Island and I don’t even get a hot dog there, so this was a major decision. Of course, my selection was a Snake River Farms Kobe Beef Wagyu “Haute Dog” with house pickled slaw, Truffled Mozzarella Black Pepper Aioli on a fresh baked croissant with a side of Caesar Salad, and it didn’t seem like that much of a gamble. I was even magnanimous to share some of the “Haute Dog” with my Bride, and to be truthful, it was wonderful and I am sure that I could have even ordered several more of them, they were that great. There will always be more trips to Vegas. 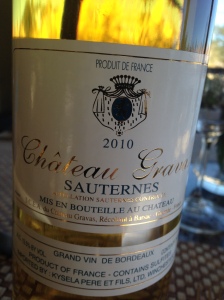 The wines for lunch were equally enjoyable, after we showed our waitress that there was Sauternes available by the glass. With our appetizer, we enjoyed Chateau Gravas Sauternes 2010 a delightful amber glass of pure “Nectar of the Gods” from Bordeaux. It is just amazing how Sauvignon Blanc and Semillon blend so harmoniously in Sauternes to deliver such a pure drop of sunshine to pair with the richness of the Foie Gras. My Bride chose a glass of Pazo Senorans Albarino 2015 to go with her salad. This wine is from the Rias Baixas district of Spain and to carry this designation, the wine must be at least seventy percent Albarino, but this wine was one hundred percent Albarino. This charming wine spent four months on the lees in Stainless Steel vats which gives it the crisp and youthful taste. I am always cautious of wine with a salad because of the dressing, but the crispness of this wine and the light dressing worked perfectly. For my “Haute Dog” I had to select a wine that would have been incongruous for a hot dog, but paired perfectly with my culinary treat. I had a glass of Albert Bichot Mercurey Premier Cru Champs Martin 2014 from their Domaine Adelie. Albert Bichot was established in 1831 and they now have four estates in the Burgundy region to handle all of the different wines that they produce; they have an estate in Pommard, Nuits-Saints-Georges, Chablis and Mercurey. The estate in Mercurey, which is one of the five communes in the Cote Chalonnaise is Domaine Adelie. There are thirty Premier Cru designations in Mercurey and of course the grape is Pinot Noir. This wine was so smooth with my dish, that it was actually making me think of ordering a refill of both, as I really didn’t want to leave this idyllic setting. I guess the Petrus will just have to wait.