Posted on January 12, 2017 by thewineraconteur

During the Christmas season, gift giving is the norm and sometimes I get wine and sometimes I get wine themed gifts. Over the years, I have written about many gadgets and trinkets that are strewn across our house. I always enjoy any gift, because I view it as someone thought enough of us to give us the gift. We have quite a few wine glass coasters, mostly with wine themes and they come in handy as they save the wooden furniture from getting unsightly rings. The latest set we received were selected especially with us in mind as they are remembrances of past wines that we have shared with them.

The first wine coaster shows two different bottles of Chateau Mouton-Rothschild and one bottle of Chateau Lafite-Rothschild. Millions of words have been written about these two famous wines from the Pauillac commune of the Medoc. Chateau Lafite-Rothschild has been famous for their wines since the 1600’s and was known as “The King’s Wine” and it was the first wine of the First Growths of the 1855 Classification of the Medoc. I have had the good fortune to have had bottles from the 1974, 1986 and 1989 vintages and I even have a bottle or two resting in the cellar. Chateau Mouton-Rothschild, which is part of the same family, but distinct ownership started off in the 1800’s and while greatly respected, they were listed first of the Second Growths. This was a slight to them and until this offence was changed in 1973 to list them as a First Growth, they never even bothered to indicate on their labels that they were ranked. While Lafite always uses the same label, Mouton since the end of World War II has commissioned a different artist to create a new label for them. Oh, to have a complete collection of even the labels would be awesome. Besides having a few more of their wines resting, I have had the honor of enjoying the 1961, 1964, 1973, 1985, 1986 and the 1990 vintages.

The second wine coaster features another famous house of the Medoc, and that is Chateau Margaux, which many consider the most elegant of the Medoc wines and has been a First Growth from day one of the classification. Chateau Margaux is from the commune of Margaux and has one of the most famous and grand estates of almost any winery in the world. I guess that I have been blessed to have enjoyed more wines from Chateau Margaux than any other winery. Without bragging I have had the pleasure of their 1961, 1967, 1970, 1976, 1978, 1986 and 1994 vintages and I still have a couple collecting dust. 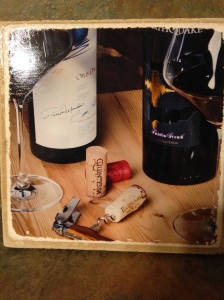 The third coaster features the famed Opus One winery, that is a joint venture between Baron Philippe de Rothschild (of Chateau Mouton-Rothschild) and Robert Mondavi of Napa Valley. This was one of the first wineries that I had to visit when we made our trip to Napa Valley which almost broke our piggy-bank, and it was the first winery that I had book an appointment with. One of the original cult-wines from Napa Valley and still going strong, since their first vintage of 1979. Another wine that I have had enjoyed over the years with the 1989, 1992, 1994, 1995,1996, 2000 and 2002 and a couple of more that are also collecting dust.

The last coaster and certainly not the least, because I remember having the first bottle of it at a barbeque and it was served with steaks. Caymus Vineyards Special Select is from the Chuck Wagner group of wines, and though his family grew grapes for years, they only started making their own wine in 1972 and the Special Select is not offered every year, only when warranted. I have one bottle left from our grand tour of Napa Valley and it is a 1995 that we tasted at the winery.
These coasters just made me stop and appreciate the good fortunes that I have had, and in no means, am I bragging, but years ago, when I first started enjoying wines they were not as dear as they are today.

A non-technical wine writer, who enjoys the moment with the wine, as much as the wine. Twitter.com/WineRaconteur Instagram/thewineraconteur Facebook/ The Wine Raconteur
View all posts by thewineraconteur →
This entry was posted in Uncategorized, Wine. Bookmark the permalink.