Posted on January 6, 2017 by thewineraconteur

When you get a group of people together even for New Year’s Eve, there will be no consensus of what sparkling wine is best. Everyone has different tastes and there really is no one-size-fits-all, in fact that is true for any type of wine. I have noticed that even at weddings when there is sparkling wine poured for all of the guests for toasting, afterwards there are plenty of glasses that have been barely touched. I think that some Brut finished wines are just too dry for many people, and really that is not sacrilege.  I have always espoused that people should drink what they enjoy, and in that manner, they will eventually try other wines and that is what all wine lovers do.  I know for a fact that I have learned to embrace many of wines.
I know that we even had some bubbly for the minors to toast in the new year, and yes, I did not contribute to the delinquency of minors, as we had some non-alcoholic beverages for the kids. I mean when I was a kid, the concept of minors having a drink was a bit looser, and everyone kind of turned a blind eye to the occasion, but today it is different. We tend to pour glasses of Martinelli’s Sparkling Cider for the kids to drink and we even let them have it in a flute, once they are old enough, that we don’t have to worry about them breaking a glass. 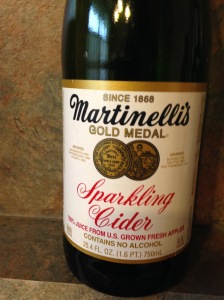 Some of the women even brought their own bottle of bubbly, because they like a much sweeter style of wine and they figured that it might not be available from my cellar. The women were drinking Barefoot Bubbly Pink Moscato California Sparkling Champagne, and I know that my Bride and I both passed on having a glass, because there were other wines to choose from. This wine was made by the Charmat Method, or the bulk version of secondary fermentation. What surprised me, after I looked at the label, was that it was labeled “champagne” and the Barefoot firm, I didn’t think was old enough to be grandfathered in to use that term. Champagne is now universally used only for the wines from the Champagne district of France. 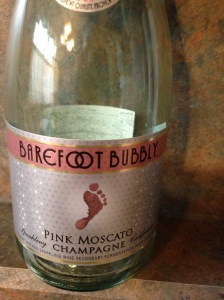 The majority of the sparkling wine that evening was Korbel California Champagne Brut NV, and since Korbel was established in 1882 and making this type of wine for years, excluding the Prohibition Era, they have been grandfathered in, here in the States, and perhaps there are a dozen other firms that also have that right. The Korbel California Champagne is produced in the time-honored way of “Methode Chanpenoise” and it is a blend of Chardonnay, Chenin Blanc, French Colombard and Pinot Noir. 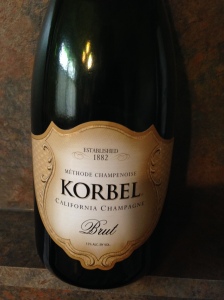 I brought up a special bottle from the cellar for the night Champagne Pommery Grand Cru 1995 from Reims in the Champagne district of France. Legend has it that Champagne Pommery developed the Brut designation for their English Market and it took off, and eventually all of the houses of Champagne now have a Brut offering. This wine is half Chardonnay and half Pinot Noir, and unfortunately, I kept it a little too long in the cellar, while it still had the “pop” when I uncorked it, maybe I should have opened it the year before. I know that plenty of people just adore older vintage Champagne, I just felt that it didn’t have the freshness that I have had from other vintage Champagnes, but it was still quaffed for the moment. My Bride and I would just like to wish everyone the best for the New Year.