Posted on December 31, 2016 by thewineraconteur

Christmas Eve is one of the holidays that we normally do not entertain on. This particular year though we ended up having everyone at our house, which is fine, because otherwise it seems as if my Bride becomes a catering company. So, since she does a lot of the cooking anyways, it really does not matter that much. All of the gifts were for the most part at our house prior to the evening, and we were still able to function for the most part, though it was a bit tight in the library, especially if there was a book that was needed, and for sure my Encyclopedia (and yes, I still have one and use it constantly) was buried in a corner on its stand. 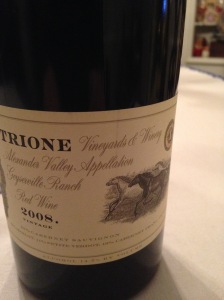 The dinner requests were rather low key and rather low-maintenance so I did not have to watch my Bride get over-burdened or full of anxiety over any of the preparations. Ham, roast beef and chicken were requested. I could live with it, though I am not a fan of the spiral-cut hams, I guess that I am of the minority, and the roast beef and sautéed chicken are both comfort foods. She did slip in a few fancier dishes like Fettucine Alfredo, Armenian Pilaf, her famous Caesar Salad and Brussel Sprouts with bacon and Balsamic Vinegar. There were also a few more dishes that were brought in, as well as all of the desserts. I think that the most drama centered around my carving of the roast beef and the ham, but even that was relatively calm. 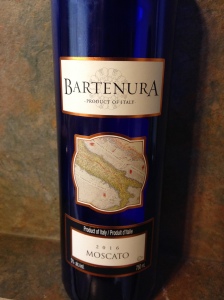 There were only a couple of wine drinkers present, so even that was rather low-key as well. Of course, there were a couple of our stand-by California Chardonnays that I have written too many times about. Also, one of the guest brought a bottle of Michigan wine, that I did not see what it was, but it was in a jug looking bottle and the wine would be poured and then the jug would disappear again, so I cannot really say what it was. Also, another guest brought a bottle to share with some of the other women, the blue bottle of Moscato, and the marketers of that winery did a fine job, because that is how she went shopping for it. Bartenura Moscato 2016 in the blue bottle is very popular among some of the ladies and it is slightly effervescent naturally, especially for a wine that young. The wine carries an IGT designation from the Province of Pavia in Italy, as Moscato is not one of the standard grape varietals from that district. I really only went through one bottle of red wine, as I only had one brother-in-law that was interested in some wine, and then one glass of it went to my Bride. I opened up a bottle of wine that I had for some time that I wanted to try, and I always am fascinated that some of the wineries still use the more substantial heavier glass bottles. The Trione Geyserville Ranch Red Blend 2008 was excellent, if I may say so. I also get a kick out of how some of the California wineries do not belong to the Meritage Society, so they cloak their Bordeaux Blend wine with the simple description of Red Wine Blend, as the way Trione Vineyards & Winery did. The wine was a classic blend of Cabernet Sauvignon, Merlot, Petite Verdot, Cabernet Franc and Malbec all grown on their Geyserville Ranch estate, and this vintage was from the first from their new facility and it was aged for eighteen months in French Oak, and half of the barrels were new. The winery is in Alexander Valley which is located in Sonoma County so it has a different feel compared to Napa Valley, but as I said it was excellent and it reminded me more of some of the classified growths of the Medoc, it was that well made. Of course, my Bride asked if we had more of it, and I had to respond in the negative, but I told her that the odds were that we could get more, perhaps not of that vintage, but since they make over a thousand cases a year, it shouldn’t be that difficult. Just a great way to start off the Christmas week.