Posted on November 29, 2016 by thewineraconteur

It was a Thanksgiving of note, on many levels. While I was carving the turkey, there was an eruption that could have caused tremors on the Richter Scale, the Detroit Lions won and were in first place for their league. There were only a handful of people in the house that are old enough to remember another occasion like that. The two television sets on the main floor were both tuned to that particular game.

As more and more of the family were arriving, some were bringing assorted side dishes and desserts for the dinner. With thirty-six people, space was becoming rare both for the food and for the guests. My Sister-in-Law from Louisville had come over in the morning to help get her dish ready, she had brought a beautiful Standing Rib Roast that her butcher had cradled for her and she had applied the rub and seasoning for the dish, and she was also making some side dishes on the spot and her daughter was doing some fancy baking of her own. My Bride had gotten the largest turkey that would fit into our roaster and that was cooking in the library, she had stuffed it, prepped it and put it into a roasting bag and just let it gently cook all by itself. Even with two grand dishes, she also decided to make a huge slab of Salmon in a Bourbon Sauce, that is becoming one of her other signature dishes. While all of this was going on, she was making the Armenian Pilaf, mashed potatoes, roasted and drizzled sweet potatoes, and she even had time to make her famous Caesar Salad dressing. The turkey was planned on being done first and then I had to chase some of the people out of the kitchen, because I was slinging my butcher knife, we were not going to have a Norman Rockwell table setting because there were too many people and all of the food would be on platters on the island in the kitchen and they could help themselves, buffet style. Carving the turkey takes time and can’t be rushed, though my one Grandson had requested a leg, so that saved some carving time; by the time I had finished carving all of the pieces and of course sampling all of the different cuts, my appetite was almost sated. I finished the turkey and plated it and it was time to carve the Standing Rib Roast. I re-honed my blade and began making the proper thickness slabs of the meat. We had used an internal meat thermometer with a radio-controlled reader and went with the suggested temperature settings, alas we should have pulled it out a few degrees earlier, but there were still enough slices of perfect rare meat, but there was a bit more medium-rare slices then I would have prefered; next time we will make adjustments. Somehow everything finished at the right time and all the platters and chaffing dishes were ready to go and the crowd didn’t even need to be prodded. After everyone had eaten, even second and third helpings, the island was cleared of all the dinner dishes. Then we celebrated the November birthday people and then the island was filled with all of the desserts. They all looked wonderful, but I didn’t even have any dessert, as I just had no room left in my stomach, oh to have the appetite of my youth. 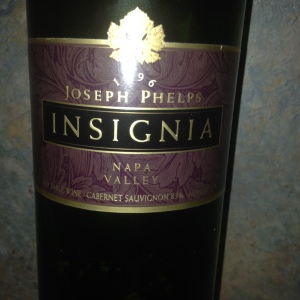 There were several more wines being poured, but I will only discuss two of the bottles and they were basically enjoyed by the Kentucky couple and my Bride and I. My Sister-in-Law and her husband were celebrating their thirtieth anniversary so he brought a thirty-year-old wine for the occasion. This was not just any old wine, this was a Saint-Emilion Grand Cru Classe “A” wine, and from the original classification of 1955 there were only four wineries that had that designation. We enjoyed their celebration with Cheval Blanc 1986 that famed wine that is made so atypical for a wine from the Bordeaux region. This wine is usually 49% Cabernet Franc, 47% Merlot and 4% Cabernet Sauvignon and despite Miles in Sideways there was not a Styrofoam cup in sight. This is a wine that should not even be opened for the first ten years after bottling and often ages well for fifty years, so I think it was at its peak. The fruit had totally softened, the color was still vibrant and so was the nose. The other notable achievement that I have to mention is that the cork was fully intact after the thirty years, but we decanted the wine, right after I was done carving and allowed it some further breathing. After that wine, I went into my cellar to find something interesting and I saw I wine that I thought merited the moment, though I had mixed emotions. On our trip to Napa Valley that almost broke the bank, because of all the wine that we purchased, we had only one bad experience at a winery, that I had wanted to visit, and we had planned on getting a six pack and only ended up with one bottle because of the poor treatment we received. I never even wrote about going there, as I was so upset, but any ways I opened up my only bottle of Joseph Phelps Insignia 1996. This wine screams “cult wine” status, they are just outside of St. Helena and they have other vineyards in Stags Leap, Oak Knoll, Rutherford and Oakville and they were established in 1973. This particular wine is a blend of 83% Cabernet Sauvignon and 17% Merlot and spent twenty-six months in new French Oak before bottling. My Brother-in-Law got excited as soon as he saw the bottle I had in my hand. The cork on this bottle crumbled, but I figure that I was going to decant it as well, even before I tried to open it. There was plenty of sediment as well as the cork that I filtered out. In spite of how they treated us at the winery, I have to admit that this was a wonderful wine and twenty years later there was still an abundance of fruit and a deep color and nose, just what I would expect from a wine of this caliber. Who knows, perhaps we will try getting another bottle, though my Bride has a long memory for slights. So, we may not have had the most popular Thanksgiving wines that most people cite for that day, they still made for a wonderful meal and time.

A non-technical wine writer, who enjoys the moment with the wine, as much as the wine. Twitter.com/WineRaconteur Instagram/thewineraconteur Facebook/ The Wine Raconteur
View all posts by thewineraconteur →
This entry was posted in Dining, Wine and tagged Cabernet Franc, Cabernet Sauvignon, California, Chateau Cheval Blanc, France, Insignia, Joseph Phelps, Merlot, Napa Valley, Saint-Emilion Grand Cru Classe "A". Bookmark the permalink.