Posted on October 6, 2016 by thewineraconteur

My monthly dinner club met at one of our usual restaurants. The restaurant had changed ownership in this past year and one is always leery if management will make changes for the worse. So far it appears to be fine and with most of the regular staff still working there. The Masters Restaurant is a restaurant that was built to emulate the classic club house in Augusta, and there are antique golf memorabilia where ever one looks. Not only does my club use this venue a couple times during the year, but my Bride and her family uses it once a month for their “cousin’s get-together.” My dinner club has been meeting like this for over a hundred years and still going strong, though some changes have been made over the years and even the thirty some years that I have been a member. 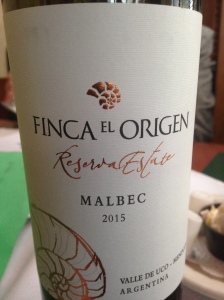 Some of the venues are better than others and it depends on what the host members decide on the evening. This particular meeting during the cocktail part of the night, there were some hot appetizers offered, nothing real fancy, there were chicken strips and Swedish meatballs, but they added a nice extra touch. We were offered our choice of Beef Tenderloin Tips, Hawaiian Chicken or Salmon. I went with the Beef Tenderloin Tips which came with a mushroom gravy served on a bed of rice pilaf and a side of seasonal vegetables. The meal came with a fine dinner salad, but yours truly had to request a salad with Italian dressing, as the default dressing there is Greek. For dessert we traditionally have chocolate sundaes; what do you expect from forty men?

After enjoying my usual Whisky Sour, I had to choose a wine with dinner. The selection of wines by the glass at The Masters Restaurant is a bit limited, but I went with Finca el Origen Reserva Estate Malbec 2015. Finca el Origen is a relatively new winery as they were founded in 1996, but they have a great location in the Valle de Uco, which is a defined valley in the Mendoza district of Argentina. Malbec is the real star of the valley, though there are other varietals that are grown quite successfully there as well. The valley is quite recognized for its terroir and there are several Bordeaux wineries that have hoisted a flag there as well including the Rothschild group. The wine paired well with the dinner and what more can one ask for. Until the next meeting.

A non-technical wine writer, who enjoys the moment with the wine, as much as the wine. Twitter.com/WineRaconteur Instagram/thewineraconteur Facebook/ The Wine Raconteur
View all posts by thewineraconteur →
This entry was posted in Dining, Wine and tagged Finca el Origen, Malbec, Mendoza, Valle de Uco. Bookmark the permalink.