Posted on August 31, 2016 by thewineraconteur

I guess I have been remiss and it has been brought up to my attention that I should add another character to my cast of wine devotees. Ms. Yoga is one of our oldest friends and she has been on many an outing over the years, and we have had many fine memories that have centered on wines. I am talking about times in Michigan, Florida, and North Carolina and in Napa Valley, California. There has been plenty of wine tasted over the years and many great dinners, laughs and fine times. I was going to give her a nom de plume about her favorite color, but over the years that has changed, and she is deeply into yoga and is even thinking of teaching it later. Ms. Yoga has just been part of our lives for so long, that she is more than a friend, actually she and my Bride were friends, and I met them both on the same night as they went to the same affair that I was at. 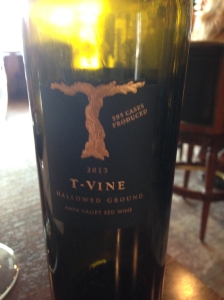 Ms. Yoga was in town for a long weekend for her high school reunion, and I will just say that the number was higher than ten. She wanted to get together with us, before she started her reunion get-together. We went to see a movie, and ended up meeting her brother who went to see the movie as well. After the movie the four of us went to a wine bar, and we had some time to use until the restaurant that we were going to go have dinner at opened. The wine bar is D.Vine Fine Wines and I just think that is a great name for a wine bar and shop. We used to belong to the wine club from an earlier shop that was there, but we had to stop it, as the selections were not what we were looking for and I really should give this place another look since it has a new name and a new owner. In fact they have weekly wine talks and tastings, but it seems that they usually conflict with my work schedule or we have a prior commitment for that evening, but nothing lasts for ever. In fact Ms. Yoga got a kick out of me, as while we were there, some customers that I had not seen for a while walked in, and she said that I kind of took over the wine bar with introductions and working the room. In fact one of the customers as I was introducing my Bride to him called her my Bride before I did, as he follows this blog. 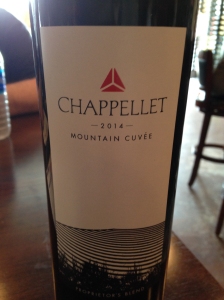 We had several wines by the glass while we were there and I will mention two of them now. The first was Chapppellet Mountain Cuvee 2014 from Napa Valley. This is a proprietary red blend of theirs and consists of Merlot, Cabernet Sauvignon, Petite Verdot, Malbec and Cabernet Franc. It was a most easy drinking and smooth wine that it was made for early drinking, I think, because it was young and still an easy drink. The other wine was also a proprietary red blend, but of a much different blend and identity. The T-Vine “Hallowed Ground” 2013 is also from Napa Valley. This wine was a blend of Zinfandel, Petite Sirah, Charbono and Carignan and spent sixteen months in oak for aging. The “Hallowed Ground” was that the fruit was from some famous vineyards in Calistoga, Howell Mountain and some other areas in the valley. I actually found this wine more interesting of the two reds of this article. I may also state that over the years we have been to many wine bars in many areas with Ms. Yoga and we have always had the best of times.