Most people would have trouble remembering when going shopping was exciting, and people dressed up and looked forward to it. I can remember when relatives would come into town and the store that I took for granted, was one of the destination spots that they would want to see. J L Hudson was one of the grand department stores and known across the country. The flagship store in downtown Detroit had thirty-three levels and was huge, in fact it was the second largest department store in the nation, and it also had the largest American flag that it would unfurl for holidays. I still have my Mother’s original charge card which was a metal disc that now looks like a key ring fob, and as a little boy I remember being fascinated by the Byzantine maze of pneumatic tubes that were everywhere, as the purchases were tunneled to the main accounting desk to be approved, decades before computers. Even the water fountains and elevator cages were works of art, and it was such an event to enter into the store. There were doormen and elevator operators, and back then one could even have their purchases delivered to one’s home within a day or two by the fleet of green Hudson trucks that were assembled just for that service. 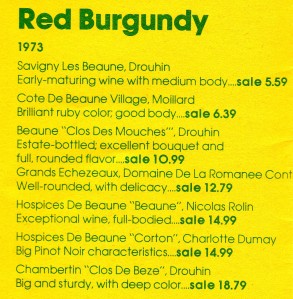 They were a department store above the rest. They had a book department, but they also had a fine book department as well, that sold first editions and special editions. Almost every department of goods that they carried had at least two quality levels. I don’t recall appliances, but they may have been there as well, along with the furniture, decorating services, art work, china, stemware, flatware and the different restaurants, and the toys (as a kid I would naturally remember the whole floor devoted to that), the clothes, the furs, the shoes and accessories and almost anything else one could think of. They even had wine, and years ago, when I first started writing, I mentioned how I was helped along with my knowledge of wines by this august department store. 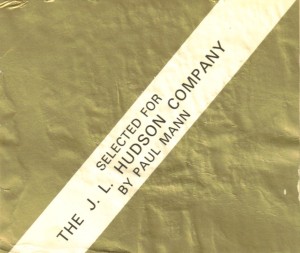 I bring this all up, because I found some sale pamphlets that I had saved from back in the early days of learning about wines. Much to my Bride’s chagrin I have saved many items, but they have made my articles more interesting, at least to my way of thinking. The wine labels for sure, but also the matchbooks and menu and other ephemera that I have posted as an adjunct to my writings. It also explains how as a kid, I had the chance to enjoy some wines that today; I may not buy as they are very dear in price. Here are some examples of what I have found:
Ch. Tronquoy Lalande, St. Estephe 1971 $4.99
Ch. Lafon Rochet, St. Estephe 1970 $8.29
Ch. Palmer, Margaux 1974 $7.99
Ch. Cheval Blanc, St. Emilion 1973 $14.99
Ch. Mouton-Rothschild, Pauillac 1973 $17.59
Ch. Lafitte-Rothschild, Pauillac 1973 $17.99
Richebourg, Domaine De La Romanee Conti 1973 $19.99
Rene LaLou $18.39
And the best part of it all was that there was an additional ten percent discount on mixed case purchases. 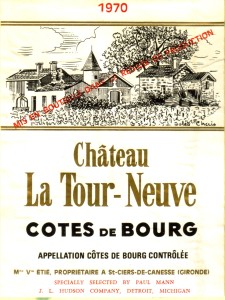 How can I not get a bit glazed in the eyes when I look back at some of these prices and only wish that I had bought more wine, but as a student and then as a young father, there were other expenditures that were much more relevant. I am just happy that when I did discover wine, it was before the price escalation and pricing explosions that occurred later in life. At least it explains some of these great labels that I have shown over the years.  Alas the grand old J. L. Hudson company is no longer among the retailers of today.

A non-technical wine writer, who enjoys the moment with the wine, as much as the wine. Twitter.com/WineRaconteur Instagram/thewineraconteur Facebook/ The Wine Raconteur
View all posts by thewineraconteur →
This entry was posted in Wine. Bookmark the permalink.