Posted on June 4, 2016 by thewineraconteur

I guess that I have been lucky that I tried many wines, when I first started my self-studies. Since I was just talking about a Rhone style wine in California, I guess I should mention the real thing as well. As I look back, I really have not mentioned that many wines from Chateauneuf-du-Pape and I should have. Chateauneuf-du-Pape actually means “new castle of the Pope” and goes back to the Fourteenth Century during the time of Pope Clement V, the same Pope that is honored on the wine from Graves Chateau Pape Clement. Pope Clement chose Avignone as his new seat and the town has been historical ever since. 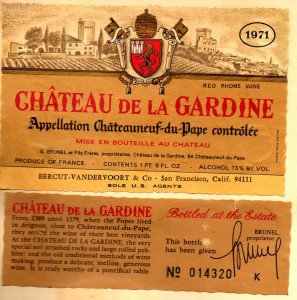 Chateauneuf-du-Pape wines were listed originally as being from Avignone, in the 1920’s one of the Barons came up with the paper listing quality conditions about the area, and it actually became the precursor to the appellation system that is now in France, and copied around the world. The area is one of the most arid of the Rhone Valley and there are very stringent rules even about watering of the vines. They make both red and white Chateauneuf-du-Pape wines, but the red wine is the most famous and honored. There are about eighteen grape varietals that are allowed by law to be used, but the main three are: Grenache, Syrah and Mourvedre.

As I stated earlier, in my youth I wanted to learn about different wine styles and I attempted to buy wines from many different areas to see what I would like and for future selections. I have to say that three of them, which I looked up, are still being produced. The first was a generic regional wine by the negociant Barton & Guestier. Another wine that I tried was under the umbrella of Alexis Lichine & Co. and that was Domaine de Nalys 1973 and it was an estate bottled wine. The third bottle of wine was Chateau de la Gardine 1971 and it was also an estate bottled wine. Chateau de la Gardine is made in the classic tradition of equal parts Grenache, Syrah and Mourvedre and they will probably continue this method as it works perfectly for them

A non-technical wine writer, who enjoys the moment with the wine, as much as the wine. Twitter.com/WineRaconteur Instagram/thewineraconteur Facebook/ The Wine Raconteur
View all posts by thewineraconteur →
This entry was posted in Wine and tagged Chateauneuf-du-Pape, France, Grenache, Mourvedre, Southern Rhone, Syrah. Bookmark the permalink.