The Grill at the Ritz

Posted on April 21, 2016 by thewineraconteur

I am actually writing this article, on the day that I met my Bride, but that is an article that I wrote years ago several years back, and you may have missed it. Anyway, I realize that the title of this article is a bit vague, as several Ritz establishments have The Grill, but the one I am writing about was in Dearborn, Michigan. This particular Ritz was always hinted at, that it was the most affordable of all the hotels in its chain, and that could be. Though from the time that you met the valet for your automobile and encountered the doorman, you realized that you were at the Ritz, and not an ordinary hotel, it may have been affordable, but the service was still stellar. I think that the most incongruous feature was that when one had their reservation for The Grill, one had to pass by hordes of people that looked like they were at an amusement park, instead of the Ritz, I guess that is just my last century upbringing coming to the surface.

One night we were having dinner with our family from Louisville and The Grill was the chosen destination. One could tell that this was a much more laid-back Ritz as the restaurant was not sequestered off to the side, but just seemed to be part of the main hall. It certainly worked well for their famed Sunday and Holiday brunches. After being seated for dinner and studying the menu and the wine carte, we proceeded to order for the evening. My Bride started off with Caesar Salad and it was the classic version, while I opted for the classic French Onion soup. The other couple had a Caprese Salad and a classic Shrimp Cocktail. They then proceeded to have a Filet Mignon for my Sister-in-Law, while my Brother-in-Law had Dover Sole, a dish that he tends to order whenever he gets the chance. Of course we are creatures of habit as well, and my Bride had Pan Roasted Salmon with capers and olives, while I went with Braised Short Ribs of Beef with Ciopillini Onions. We ordered some sides of asparagus and the Five Mushroom and Onion Braise. A truly delightful meal with outstanding service and worthy of the Ritz and their well earned fame. 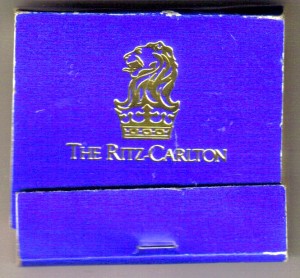 After cocktails we had selected almost the perfect bottle of wine, but then again both my Bride and my Brother-in-Law both have no problem having a full bodied red wine with their meal. We enjoyed a bottle of Heitz Cellar Martha’s Vineyard Cabernet Sauvignon 1986. This is one of the first of the legendary Cabernet Sauvignon wines to emerge from Napa Valley in the Sixties. The wine was first produced in 1965 and Heitz was so impressed with the 1966 vintage that he insisted that Martha’s Vineyard be added to the label. Martha’s Vineyard is still in production today and it is strictly an agricultural pursuit and they have sold all their production each year, by agreement, to Heitz Cellar. Even though Heitz Cellar is in St. Helena, Martha’s Vineyard is located in Oakville and nowadays the wine carries the Oakville AVA, but back then it just read Napa Valley. While the wine is from 1986, it was not bottled until 1990, so it had plenty of time to mature at the winery. For such a great wine there was quite a large production, as according to the label there were 6,938 cases of wine produced as well as 2,400 Magnums, and each bottle receive it owns number. It was a great meal and wine, up to the standards of other restaurants that we have dined at, at other Ritz locations.

A non-technical wine writer, who enjoys the moment with the wine, as much as the wine. Twitter.com/WineRaconteur Instagram/thewineraconteur Facebook/ The Wine Raconteur
View all posts by thewineraconteur →
This entry was posted in Dining, Wine and tagged Cabernet Sauvignon, California, Heitz Cellar, Martha's Vineyard, Napa Valley, Oakville AVA. Bookmark the permalink.