Posted on February 27, 2016 by thewineraconteur

I am positive that there will be some spectacular bottles of wine being bandied about on Twitter the last Saturday night of February. That evening has become known as “Open That Bottle Night” and was created by Dorothy Gaiter and John Brecher from their “Tastings” wine column in the Wall Street Journal. The concept is quite simple and really refreshing; why wait for a special night that we are all claiming to have to open a special bottle of wine. 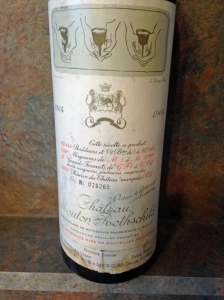 Some writers who may have very deep pockets can go and buy something wonderful. Alas I am not of that group and most of the writers that I know are not, but we all have those great bottles that are collecting dust in our cellars. I will say that I have plenty of dust collectors and that is fine as it adds a mystique to the bottles in the oversized closet that I call a cellar. I have had the good fortune to have bought plenty of bottles over the years, and some even back then were quite dear, especially since I was working to pay for school. Even though we have prior plans to go out “wining, dining and dancing” as it was called back in the day, the venue we are going to would preclude the two bottles that I will show from my collection. I also think that we would need at least another couple to join us to savor these wines.

I went and looked in the section of the rack where I have my Bordeaux wines stored, and I do mix Medoc, Pomerol and Saint-Emilion together, as they are all similar in style. My new world Meritage wines are kept in another area of the racking system, at least I think that I know what I am doing. There really is not much to say about either of the two wines, especially since I will not be reporting on them immediately, but in case I have to defend my honor, here are the two that I would have really thought about opening. The first bottle is Chateau Mouton-Rothschild 1964 from Pauillac featuring the artwork of Henry Moore. Besides the artwork, one of the unique aspects of the label is that no where is it mentioned that it is part of the Classification of 1855 for the Medoc. There was long animosity for them about the Classification as the were listed as the top of the Second Growth and they rightfully felt that they should have been considered a First Growth from day one, and this has been rectified, but it did take over a century to correct. The other wine is a First Growth and was always considered a First Growth, Chateau Cheval Blanc Saint-Emilion 1992. Chateau Cheval Blanc is the famous Merlot wine that was featured in the movie Sideways that swayed susceptible people away from Merlot wines for some time, and I do promise that when I open it, it will not be with fast food and a Styrofoam or waxed-coated cup. So while the gauntlet will be tossed, I will only be able to do it in the Cyber World and not in the Real World this year.

A non-technical wine writer, who enjoys the moment with the wine, as much as the wine. Twitter.com/WineRaconteur Instagram/thewineraconteur Facebook/ The Wine Raconteur
View all posts by thewineraconteur →
This entry was posted in Wine and tagged Ch. Mouton-Rothschild, Chateau Cheval Blanc, France, Medoc, Pauillac, Saint -Emilion Grand Cru. Bookmark the permalink.

6 Responses to Open That Bottle Night