Posted on September 20, 2015 by thewineraconteur

It seems that since the Paris Judgment of 1976, instead of California Wine Month, it could be California Wine Year every year since. California has a varied style of topography for wine growing that can make any country envious, not to mention assorted climates and a variety of terroir that is acclaimed by many. Almost every type of varietal has been and still grown in California, so any style of wine can be found there. It has a long history of vineyards being planted from the 1800’s, suffered through the Prohibition and had a slow return of wine growing since then. I can think of the Inglenook winery that has a very long and historic run and the name has returned to prominence. 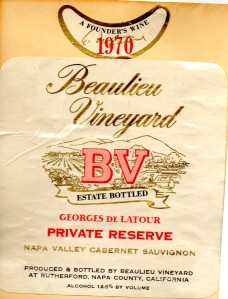 When I first started discovering wines, most of California was originally thought of as the center of jug wines, those large gallon jugs of wine that used to proclaim California Red Wine or California White Wine, or they may have said Burgundy, not much to go on back then. To this day, one can buy California wines where the fruit could have been harvested from across the state, to getting wine from AVA districts, all the way to at least one winery that I had discovered that was its own AVA. One could write almost eternally on the different aspects of California wines and would never find a logical ending. 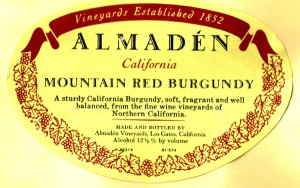 My Bride and I have had the good fortune to have visited some of the wine areas of California over the years, and have even visited many wineries. One year we were there during harvest and I had the good fortune to even taste some wine grapes, just before picking, and to this day the only way I can describe them, is to liken the ability to pluck sugar cubes off of the vines. Having made appointments at certain wineries did much to help me dispel my earlier memories of California wines and now I think that the majority of wines that we drink at home are from California. Some of my earliest “real” California wines that I tried personally from the early days, when I was self-educating myself, which I am still doing, were from wineries that are still known today like Inglenook, Sterling and Souverain. In fact, one of the earliest wines that I ever tried from California, prior to the great wine tasting was Beaulieu Vineyards Georges de Latour Cabernet Sauvignon Private Reserve 1970 and it made me re-evaluate my thoughts about California back in my college days. So the words of the song are almost correct for me and about my early formative wine years “California, here I come, right back where I started from.”

A non-technical wine writer, who enjoys the moment with the wine, as much as the wine. Twitter.com/WineRaconteur Instagram/thewineraconteur Facebook/ The Wine Raconteur
View all posts by thewineraconteur →
This entry was posted in Wine and tagged California. Bookmark the permalink.