Posted on February 8, 2015 by thewineraconteur

Here we are in Las Vegas taking the families out and we walk into a restaurant, where we had to look twice where the entrance was. We walk in the front door into a small vestibule that has no doors, plenty of photographs on the walls, and an old pay telephone on one wall. All of a sudden a small little door on one of the walls opens up out of nowhere, and a fellow looks and asks “what’s the password?” Then he looks at me and says “oh, it’s John, come on in.” It turns out that the fellow checking for passwords that evening is one of the myriad of cousins to my children out in Las Vegas. A door appears where the payphone is mounted and we walk into the restaurant. The restaurant looks impressive from what you can see, because even though there are chandeliers all over the place, it is really dark, as we are escorted to our table for the evening. Neither of my children or any of their families has been here before, so it was a treat for all of us. We walked by a side room that should have been perfect for our large group, it must have been the “Godfather” room, as all of the photographs and posters were of the films, and there was a video screen that was running the movie when I looked in. Instead our crowd with all of the kids in tow was seated at a long table along a wall, and I shall call it the “Chairman of the Board” table, because there were several framed pictures of Francis Albert Sinatra; I felt at home sitting at the end of the table. We also enjoyed listening to “Saloon Singer” crooning all of the standards of another era. 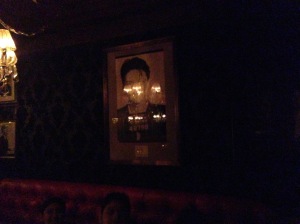 I did mention that the restaurant was dark; in fact all of the menus had a small flashlight on a string, so that the patrons could read what was available. Even taking pictures was difficult, it was that dark. The menu dishes all had taglines from assorted films and television shows about the underworld. Some of the dishes were called “Angels With Dirty Faces,” “Fredo’s Wise Guy Alfredo” and “Rat Pack Pesto” to name a few. My Bride and I both ordered “Scarface Shrimp Scampi” as she had never had it, and had always heard me talk about the dish, alas this dish had jumbo shrimp instead of prawns, but it was very well executed anyways. She started off with “Tony Duck’s Soup” also known as Pasta Fagiole and it was wonderful, while I had the Creamy Garlic salad dressing and it was one of the best versions of this long missed dressings that I have had for some time. My children and their children all ordered dishes and everyone was enjoying dinner, as you can tell, because the kids were not acting up.
As I was scanning the wine list with the flashlight, our waitress mentioned that they just received some bottles of what she called a “Baby Amarone” and my ears perked up. I had never heard that expression used and how bad could a wine like that be? So I ordered a bottle of it for dinner, and I know some would grimace with the thought of an Amarone with a shrimp dinner, but with all of the pasta hair, butter and garlic in the dish, I thought why not. The bottle of Allegrini Palazzo della Torre IGT Veronese 2010 soon arrived and it had everything that one could expect from the description. The wine was a blend of Corvina, Rondinella and Sangiovese varietals and thirty percent of the grapes were done in the Ripasso method (Amarone) where the grapes are air dried before making the wine. The Allegrini family traces their wine making back to the Sixteenth Century and that would cover a lot of wine. In case you are not film buffs like I am, the quote at the beginning of the article is from “Some Like It Hot” and I immediately thought of this exchange of dialogue when the peephole door opened when we were in the door-less lobby when we entered.

A non-technical wine writer, who enjoys the moment with the wine, as much as the wine. Twitter.com/WineRaconteur Instagram/thewineraconteur Facebook/ The Wine Raconteur
View all posts by thewineraconteur →
This entry was posted in Dining, Wine and tagged Amarone, Corvina, F.LLI Allegrini, Italy, Palazzo della Torre IGT, Ripasso, Rondinella, Sangiovese, Verona. Bookmark the permalink.