Posted on January 27, 2015 by thewineraconteur

As I am getting material ready for one of my dinner club meetings, I remembered a place that was one of our former secretary’s favorite places to have a meeting on the west side. We would meet at the Botsford Inn; the Inn was established in 1836 and was restored and furnished by Henry Ford in the 1920’s. Mr. Ford was keenly interested in historic buildings, and if you have ever been to Greenfield Village in Dearborn, you can see all of the buildings that he actually had moved and restored to this setting. The Inn was situated on one of the old Indian trails from Detroit across the state, and became a stop during the wagon transportation, before we became the Motor City. There is a marker on the grounds testifying to the historic importance of the building. 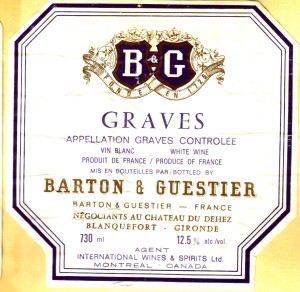 The Botsford Inn was a famous location for lodging and dining especially after the restoration of the building. It was very popular for their business lunches and dinners, not to mention that it was the site of many wedding receptions back in the day. The antiques and the framed quotes were just something that one would stop and admire on the way to one’s table. One of the famous dishes that they were known for was their turkey and stuffing served either for lunch or dinner throughout the year. They also would have as a regular part of the menu Poached Dover Sole stuffed with crabmeat, Chicken Cordon Bleu, a Short Ribs Casserole, Frog Legs sautéed in wine, and Calves Liver with bacon or onions. Those were pretty much staples of what restaurants offered to business men back in the day, for those that were looking for American Cuisine as opposed to Continental offerings. I remember having had most of those dishes over the years there, when we would all meet there.

The beverage of choice back then was more of cocktails and beer (as that was what men drank back then, some of the members would chide me, when wine was not as common). I remember having white wine with a lot of the dishes, and one of the most popular wines back then was from the wine negociants of Barton and Guestier, commonly known as B&G. I am sure from a business perspective that this made a lot of sense, instead of trying to maintain a wine from a certain chateau, that a good dependable regional blend was the way to keep from changing the wine list that often. Graves was considered the birthplace of Claret wines, and while the red wines from Graves can be legendary, the area is now associated with a lot of people with a slightly dry white wine that is made primarily from the two different varietals Sauvignon Blanc and Semillon. The name Graves has nothing to do with cemeteries or the mortuary arts, it refers to the gravely soil that is found there from when the glaciers crossed the area and left deposits of quartz, which from the finer wines, you can encounter this particular terroir in the wines, both in the red and the white.

A non-technical wine writer, who enjoys the moment with the wine, as much as the wine. Twitter.com/WineRaconteur Instagram/thewineraconteur Facebook/ The Wine Raconteur
View all posts by thewineraconteur →
This entry was posted in Dining, Wine and tagged Barton & Guestier, France, Graves, Sauvignon Blanc, Semillon. Bookmark the permalink.