A Couple of More Christmas Gifts

Posted on January 5, 2015 by thewineraconteur

I think my Bride got more gifts of wine, than I did this past season, which is a bit amusing. When we first met, she would drink some white wine, but usually drank Dewar’s, which she still enjoys. After meeting me, she branched out and really started enjoying red wines, as well as discovering all types of varietals, which she may have passed on, in her earlier years. I am just going to mention a couple of the wines that she received.

One of the wines is from a very popular firm, that started out as a boutique winery in 1981 by two wine loving psychiatrists and they named their company Folie a Deux, and their popular wine group is called Ménage a Trois, which is quite racy, but a great name for marketing. The first time we had some of their wines was in Napa on the Napa Wine Train, at a tasting after our dinner. Since then we have had some of their wines periodically, as it can be found in a lot of restaurants. She received a bottle of Ménage a Trois Merlot 2012, and this wine carries a California designation. This broad designation is because the fruit is harvested from a couple of locations and blended together, in this case from the Coastal Region and from Lodi. I am sure that we will enjoy this with a dinner soon. 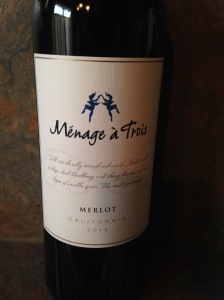 The other bottle of wine is actually a bottle of sparkling wine from Michigan. We have been to the winery a couple of times, and my Bride has been there a couple of more times without me, funny how that works out. From the picture you can tell that she received it from one of her girlfriends, as the bottle is dressed in a nice outfit as well. The bottle of L Mawby Blanc de Blancs Brut NV is from the Leelanau Peninsula near Traverse City. Besides being at the winery, the winery is also the house bubbly at the Grand Hotel on Mackinac Island, and they take their Methode Champenoise quite seriously, and the particular bottle of wine that my Bride received is made entirely from Chardonnay. This will be a nice bottle of wine to celebrate one of those moments that just pop up from time to time, and after all, there is never a wrong time for some sparkling wine.

A non-technical wine writer, who enjoys the moment with the wine, as much as the wine. Twitter.com/WineRaconteur Instagram/thewineraconteur Facebook/ The Wine Raconteur
View all posts by thewineraconteur →
This entry was posted in Wine and tagged Blanc de Blancs, Brut, California, Chardonnay, Folie a Deaux, L. Mawby Vineyards, Leelanau Peninsula, Menage a Trois, Merlot, Methode Champenoise, Michigan. Bookmark the permalink.

3 Responses to A Couple of More Christmas Gifts