A Couple of Everyday Wines

One never knows when there will be some wine at the moment. I was at a fine men’s clothing store and the subject came up, and of course I can fan a fire like this very easily. It is amazing how many people that appreciate a fine garment also appreciate a glass of wine and a good meal. These have been some of my favorite topics for years, as if you are surprised. 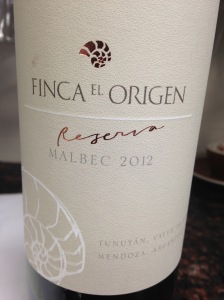 The next thing I know a bottle of wine is opened and glasses are being filled. Now for the merchant this is an excellent marketing ploy and one that can only be done by fine independent merchants. The wine does not have to be stellar, unless the customer calls for an upgrade (in my humble opinion), as it is just a great way to have another common topic between the customer and the merchant. The wine was a very good choice without being a four star bottle. We were all drinking some Finca el Origen Malbec Reserva 2012 from the Uco Valley, near Mendoza in Argentina. The Uco Valley has become one of the key areas in Argentina for wine, as wineries from other parts of the world are opening up shop in this area to take advantage of the soil. This particular wine is from the first Chilean winery to enter the Argentine valley, as this wine is owned by Vigna Santa Carolina of Chile. This was a very fine everyday bottle of wine and it was a Malbec, which does extremely well in the valley. While this wine was a Malbec Reserva, fifteen percent of it was of other varietals to round out the taste and offer some extra nuance. For the Century Club fans that want to add a new varietal to their list there is some Bonarda, as well as Cabernet Sauvignon and Syrah. Good color and a decent nose with a touch of terroir, this wine is worth trying in a restaurant or at home with a good cut of meat.

While we were taking a sabbatical from shopping, another customer came in bringing a bottle of wine that he wanted the owner to try, as this is his manner, as he enjoys the hospitality of the shop quite frequently. He brought a bottle of wine similar to the types of wines one encounters in this shop. The bottle he opened was a Bogle Vineyards Petite Sirah 2010. Bogle makes some fine everyday table wines and this was of that ilk. It was a fruit forward wine that had been aged in American Oak for twelve months before bottling and since the fruit came from two diverse areas, Clarksburg and Lodi, the wine has a California cachet on the label. So there it was two totally different wines from two different continents and both added to the camaraderie of the shopping experience.

A non-technical wine writer, who enjoys the moment with the wine, as much as the wine. Twitter.com/WineRaconteur Instagram/thewineraconteur Facebook/ The Wine Raconteur
View all posts by thewineraconteur →
This entry was posted in Wine and tagged Argentina, Bogle Vineyards, Bonarda, Cabernet Sauvignon, California, Finca el Origen, Malbec, Mendoza, Petite Sirah, Reserva, Syrah, Uco Valley. Bookmark the permalink.