Posted on April 14, 2014 by thewineraconteur

We came out to Las Vegas with three missions; to see our son get married, to see our children and grandchildren that live in Vegas, and to see all of our grandchildren in a group for the first time. Suffice it to say that we were on a unique schedule. One night, while one group was off seeing the Grand Canyon, we had a chance to have dinner with our daughter and her husband at one of the restaurants in our hotel. We forgo staying on “The Strip” these days as our children live out in the Summerlin district of Las Vegas, so we stay there for convenience, as we can always drive to “The Strip.” 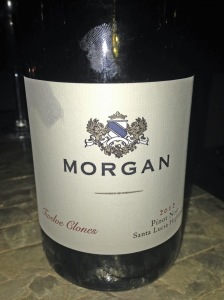 My Bride was excited to have dinner at Salvatore’s, not as much as for the food, which was very good, but for the chance to have some dancing afterwards, as they have a piano bar, and the pianist is someone that I met many years earlier. We started by having appetizers of Stuffed Artichokes and Duck Ravioli. Our daughter and her husband enjoyed Surf and Turf, while my Bride had Filet of Sole Parmagiano and I had Grilled Sea Scallops wrapped in pancetta over a tomato-basil risotto. We finished the evening with Crème Brulee and Spanish Coffees. My only complaint about the restaurant was that I thought that the food came out too quickly, as if they were trying to move the tables over an extra time per evening, and this was not enjoyable considering the quality of the food. Afterwards we made our own little dance floor near the piano bar, as we had been enjoying the music both by the pianist, but he also was accompanied by a “torch” singer and they performed the standards of another era. Since we were in Vegas, we also got entertained by an impromptu show of other performers, one a crooner in the manner of Sinatra. The other I had to look twice at, as I first thought that Willie Nelson had come into the restaurant, but it was another performer, and the city is full of impersonators in show business. We had a grand old time and I noticed that others were taking advantage of the music and dancing as well.

The wine for the evening was from a winery that I have become aware of from my wine club, but this was a wine that I had not had as of yet. We had Morgan “Twelve Clones” Pinot Noir 2012. This is a classic interpretation of what I expect from a Santa Lucia Highlands Pinot Noir. There was good color, nose and body from this very temperamental varietal that seems to have found a home in this part of the Central Coast of California. It was a fine choice with the meat dishes, and my Bride enjoyed it with her plate of Sole, I am sure that its preparation worked in its favor.

A non-technical wine writer, who enjoys the moment with the wine, as much as the wine. Twitter.com/WineRaconteur Instagram/thewineraconteur Facebook/ The Wine Raconteur
View all posts by thewineraconteur →
This entry was posted in Dining, Wine and tagged California, Central Coast, Morgan Winery, Pinot Noir, Santa Lucia Highlands, Twelve Clones. Bookmark the permalink.