Posted on March 3, 2014 by thewineraconteur

As surprised as I was to be part of an impromptu wine tasting event, it was even more fun to do it.  Our guest of honor, the young man that I had helped with a simple bit of customer relations was returning the gesture in spades.  What a delight for my friend that I was helping, some of his customers and myself as well.  The wine representative was well versed in his products and it was a pleasure to listen to his abridged sales pitch, that I am sure he uses whenever he gets a chance to show his products.  I mentioned four of the wines in my first essay, and now I will mention the other four that he brought in for us to taste and to discuss. 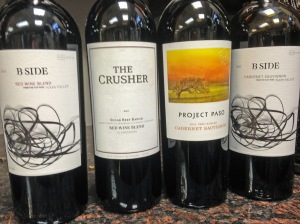 There were two wines from a group of the Sebastiani umbrella called “BSide” and if you are old like me, the B Side was the flip side of a 45 record from the Fifties and the Sixties of a song that may become a hit from being with the A side hit song.  The “flip” side of this group of wines is from some of the unheralded areas of Napa Valley where the grapes for these wines are made from.  After all not every plot in Napa is famous and has it owns winery.  The first wine was BSide Red Wine Blend Napa Valley 2010.  This wine is made from grapes harvested from seven different sub-appellations of the valley, and is a Bordeaux style blend, without the Meritage designation of Cabernet Sauvignon, Merlot, Syrah, Petit Verdot and Cabernet Franc.  I always enjoy trying these blends as Bordeaux wines were some of the original wines that I learned to love back in the day.  The other wine from this group was BSide Cabernet Sauvignon 2011, which is a wine that is harvested in part from grapes in the Rutherford district and blended with just a touch of Malbec and Petit Verdot, hence it can be labeled as Cabernet Sauvignon, and the wine displayed some nuances that just a straight Cab may not have offered.

The third wine of this grouping was from “The Crusher” series and was The Crusher Red Wine Blend Sugar Beet Ranch 2011 from Clarksburg, California.  This was an interesting blend, not a classic Bordeaux style but a wine all its own of Tempranillo, Petite Sirah and Pinot Noir.  I could see this wine paired with an assortment of dishes and even some spicier dishes.

The last bottle of this group brings me back to Paso Robles, California and an area that I am getting more enjoyment from.  This wine was Project Paso Cabernet Sauvignon 2011, and this wine was tempered with seven percent Merlot.  I have to admit that I think of this area more for Pinot Noir and Chardonnay wines, but I enjoyed this wine, though it was a lighter Cab and there are times when this would be good.  All in all it was a great way to end an afternoon and the chance to taste some wines all at one time and all overseen by one wine maker.