Another Call from “The Caller”

Posted on November 21, 2013 by thewineraconteur

I have written a couple of times about a good friend that has been given the nom de plume of “The Caller” by another blogger that I now consider a good friend as well.  There are some days when I get text messages about which wine, I would choose from a list that I am supplied with, as well as the meals that are about to be ordered.  “The Caller” enjoys his beverages, and since we have met, he has experimented and enjoyed more wines, then he used to.  He was more of a cocktail drinker, and while he still enjoys them, he and his wife have been drinking more wines when they go out for dinner.  He sent me some photographs that he took with his phone on two different nights and relayed them to me, and both of these wines were new to me, and I did some research and I thought I would share what I found about these wines. 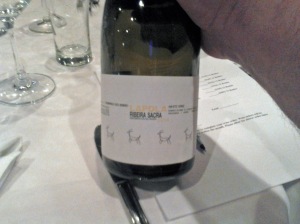 The first wine was a bottle of LaPola Ribiera Sacra 2010.  From the label, I could determine that it was a Spanish white wine, and I have only had a couple of white wines from Spain.  Ribiera Sacra is in the Galicia region of Spain and it translate to the Sacred Shore, because historically there is an abundance of monasteries in the area.  This wine is a blend of Godello (Verdelho), Treixadura, Torrentes and Dona Blanca varietals.  Verdelho is the more known name of this varietal and is found grown in several areas of the world and is appreciated for its lush flavor for a white wine.  His description was “OK, but bity (sic).” 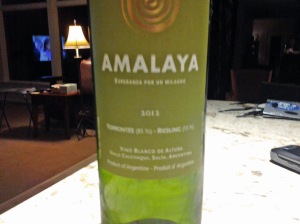 The other wine that he shared with me was Amalaya 2012, which did not register with me at all.  I found that it is from the Hess Family Estates, whose wines I have enjoyed ever since we first visited them in Napa Valley.  The Amalaya collection is from the Calchaqui Valley in Argentina, and they specialized in using the signature varietals of Argentina; for the red wines they start with Malbec and with the whites they start with Torrontes.  The wine that he was enjoying was a white wine that was 90% Torrontes and 10% Riesling.   His description of the wine was “fresh, little tart, but creamy finish!”  I would have to presume that he enjoyed this wine very much, and I can appreciate it, since I enjoy the Hess wines that I have had.  As always, I look forward to a call or a text from “The Caller” and look forward to sharing his adventures.

1 Response to Another Call from “The Caller”