Posted on August 17, 2013 by thewineraconteur

Not too long ago I wrote about my Bride going to visit her sister down in Louisville.  Now they have a wine cellar that gives my cellar an inferiority complex.  My Bride never goes down there empty handed, even though that is like taking coal to Newcastle as the old saying goes.  So she asked me to pick out a nice bottle to take down there, and when she gets there, she also bought some good table wines, just being a good guest.  I went and selected a nice bottle of Pinot Noir for her to take, as that is their most popular wine of choice at the moment.  In fact, I like to stock up on some Pinot Noir wines for the times they come up to visit, plus some Chardonnays and of course some Cabernet Sauvignon wines. 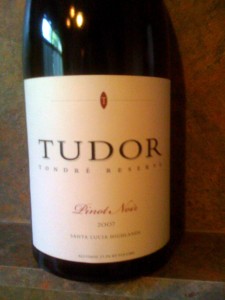 The wine I chose was a Tudor Pinot Noir Santa Lucia Highlands 2007 that I had received as one of our selections from a shipment from “A Taste of Monterey,” a wine club that we joined after we found them on our first trip to Carmel, California during a vacation.  I had really wanted to open the bottle during one of the times that we were all together at our house, but the chance never occurred.  Well I sent it down, with hopes that they would enjoy it.  Well I was right, they not only enjoyed it, I was called and asked to get them a case of the wine, if I could.   I talked to my Bride and even she enjoyed it immensely and she is not a big fan of Pinot Noir, so I told her, even though we don’t have any more room at the moment in the cellar, we should get at least a six pack of the wine for ourselves, since it was that great. 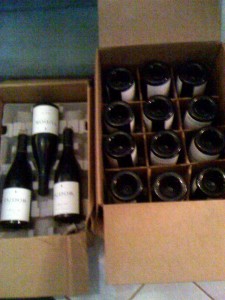 I went online to see if the wine was still available and it was.  As much as I think I am computer savvy, I still have a problem using a credit card online, and since I have always been in retail, there is just something about talking to someone, rather than an impersonal cyber order.  I called “A Taste of Monterey” and told them what I was looking for and found out that they had the eighteen bottles of the wine that I requested.  I thought great, and placed the order, since they already had our credit information on file for the wine club selections that we received.  Life is grand and all I had to do was wait for the delivery truck with the order. 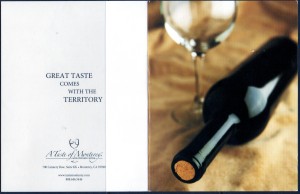 The delivery came as scheduled, tracking online deliveries is wonderful.  I then proceeded to open the cartons up, and then I discovered the wine was not the wine I had ordered.  I called “A Taste of Monterey” to explain what had happened, first I talked with one of the customer relation people that work at the store, and they in turned relayed the information to their manager.  The manager called and emailed me, to see if the problem could be resolved, and then she acted as a liaison between me and the owner of the company.  They offered me a special pricing for the one time on the wine, due to the mix-up, rather than having me ship the wine back and then having to ship another order out.  I talked to my Brother-in-Law to let him know what was going on as well, and he was so impressed with the first wine, that he was all the more eager to try another wine from them, sight unseen in a matter of speaking. 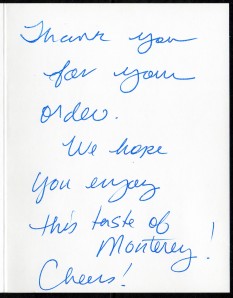 When all the dust settled, I ended up with eighteen bottles of Tudor Pinot Noir Tondre Reserve Santa Lucia Highlands 2007.  This wine is made entirely from the Tondre Grapefield with a Wine Spectator score of 92 points and there were seven barrels produced of this wine.  The manager was most gracious and concerned and even sent a follow up email to make sure that all was good.  I have written about some of the wine club selections that we have received and I look forward to opening one of these bottles soon to let you know about this wine at another time.  If I was happy with the wine club when we first joined, and I am now ecstatic about the original decision and wish to let others know what great customer service and quality merchandise they handle for the entire Monterey wine area.

A non-technical wine writer, who enjoys the moment with the wine, as much as the wine. Twitter.com/WineRaconteur Instagram/thewineraconteur Facebook/ The Wine Raconteur
View all posts by thewineraconteur →
This entry was posted in Wine and tagged "A Taste of Monterey", Pinot Noir, Santa Lucia Highlands, Tondre Reserve, Tudor Winery. Bookmark the permalink.

3 Responses to Excellence in Customer Service