Posted on March 8, 2013 by thewineraconteur

It was my sister’s birthday a couple of days ago, and I wished to take her out for dinner.  I asked if she had any suggestions, and she said she loves Italian food and DeLuca’s was one of her favorite restaurants and it was near her home, as she is not partial to long drives.  So it was a done deal.

This is a restaurant that has been in business since 1957 and has become an institution for the area as a local Italian eatery.  When we arrived in the parking lot on a Sunday afternoon, you may have thought that they were giving food away, as the lot was nearly full.  This is a sign of the popularity of the locals that dine there.  There were several parties going on, as we entered the establishment, but there was no wait for a table as the restaurant is very large and the tables are arranged for maximum usage.

We ordered several plates of food, an order of “baked ziti,” an Italian version of sirloin tips on pasta and an order of barbequed short ribs.  The main entrée dishes all were accompanied with fresh rolls, salads and a side order of pasta with a Bolognese sauce.  Nothing pretentious, just plates of food, as this restaurant just keeps rolling along giving what its customers expect and the pricing was what I would definitely call popular.  My only complaint would be that as soon as we were seated the waitress immediately appeared and requested our order, even before we had picked up the menus; one would have to presume that most of the clientele knows the menu by rote and can order their selection without the guide of the menu. 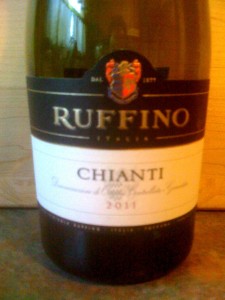 The wine list was almost like a step back in time, as there were wines offered by the glass, and about eight more wines that could be ordered by the bottle.  What intrigued me most was that most of the bottles of wine were listed as Cabernet Sauvignon, Merlot with a brand or country of origin.  What did strike me funny was that Reunite Lambrusco was listed as such, and I had to presume that it must have been one of the most popular brands even up to today for the restaurant.  When I asked our waitress the brand of some of the generic designations, she could not answer me, and had to go to the bar to get the information.  When she returned with the proper information, I decided to order one of the other branded wines on the list.  It was Ruffino Chianti 2011 and since I have had other Chianti wines from this large producer, I felt that it was the safest of the choices.  The wine had a deep color and good nose, but it tasted “light” for Chianti, but it was fine for our selection.  All in all, we were there for the celebration and not to write a review and the dinner was relaxed and the company and conversation was the highlight.

A non-technical wine writer, who enjoys the moment with the wine, as much as the wine. Twitter.com/WineRaconteur Instagram/thewineraconteur Facebook/ The Wine Raconteur
View all posts by thewineraconteur →
This entry was posted in Dining, Wine and tagged Chianti, Italy, Ruffino. Bookmark the permalink.