An Evening of Two Wine Bloggers and Their Brides

Posted on February 9, 2013 by thewineraconteur

As I started this blog, I had no idea what to expect, nor did I have any belief that anyone would read my recollections, other then perhaps my Bride.  Soon after I had begun, I had a gentleman that started to “follow” my blog and I in turn returned the favor.  We soon had a correspondence between the two of us, not only on our respected blogs, but also we became friends elsewhere as well.

My fellow blogger’s name is Oliver  and I have developed a strong admiration for his writing and his knowledge.  I also have to mention that his blog is called The Winegetter, a play on the Anglicized pronunciation of Oliver’s surname (http://thewinegetter.wordpress.com//).  I have found him to be very Continental in the classic sense of a well educated individual from the Continent, narrowing it down to Germany.  Oliver has a passion for the Riesling wines, especially from his Homeland and is very knowledgeable and words just flow from him about those wine, as well as all of the other wines that he has enjoyed.  I do believe it was Oliver that suggested originally that we get together to meet, as he is living in Ann Arbor at the moment, and I am in Livonia. 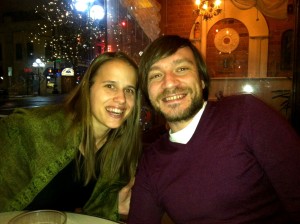 As we started to communicate about possible restaurants that the four of us could meet at, I suggested a couple of ideas, because one always has to check if there are food allergies or potential problems, so as not to have any problems during the evening.  We settled on a fine little café called Amadeus in Ann Arbor, where my Bride and I have dined before.  I would say that the restaurant is more of an Austro-Hungarian themed eatery as there is an Eastern European flavor of the cuisine.  Oliver told me that the menu reminded him of comfort food, so we made plans to finally meet.

The restaurant is an old retail establishment and they have tables in the part of the building that would have been windows displaying the wares of the establishment in days gone by.  We all met and had a table in one of the windows, which was perfect as we could enjoy our conversations away from the other diners.  What wonderful conversations we had, talking of past trips and about wines, of course.

We enjoyed appetizers and salads.  The dinner plates were very filling, plates of pork, salmon and beef with potato pancakes and more.  The food this evening was secondary to the conversation, as it was if we were two old friends that had found each other after years of separation.  From our writings, we were friends before we had even met.  The wine list contained about three to four dozen choices of wines to choose from, and it was a very eclectic mix of wines.  One would surmise that with the choices of the menu, that it would lean more towards French, German and Hungarian wines.  While all three countries had offerings, there were also wines from other parts of Europe as well as from the New World.  I was curious to see what wine Oliver would select, as I saw a couple of wines that I would have chosen.  He had selected a Rioja wine, and then we had to decide between two different Rioja wines, and our waitress said that the Lan Rioja was the proprietor’s favorite wine, so that made the selection for us.  The wine Lan Rioja Crianza 2008 was made exclusively from the Tempranillo varietal and it was subtle enough that it worked with the assortment of entrée plates that we were enjoying.

After dinner we also enjoyed a nice dessert wine a Tokay Aszu 2001 with 4 Puttonys which indicates the level of sweetness with 5 Puttonys being the sweetest.  It was a fine way to end the evening’s camaraderie, and we look forward to meeting with them again, and until then, we shall read each other’s blog.

A non-technical wine writer, who enjoys the moment with the wine, as much as the wine. Twitter.com/WineRaconteur Instagram/thewineraconteur Facebook/ The Wine Raconteur
View all posts by thewineraconteur →
This entry was posted in Dining, Wine and tagged 4 Puttonys, Hungary, Lan Crianza, Rioja, Spain, Tempranillo, Tokay Aszu. Bookmark the permalink.