Painting with a Twist

Posted on December 27, 2012 by thewineraconteur

My Bride and her girlfriend after we left Fleming’s went to a trendy new concept that they had booked about a month earlier for.  It is called “Painting with a Twist.”  And I am not sure what the twist is; I did asked my Bride about it and she just said that it was the name of the business.

When they arrived they were given a stretched canvas and some acrylic paints and brushes.  There was a theme for the evening, they had a two part picture of some wine glasses, and the fledgling artists were either to paint the top half or the bottom half of the theme pictures a best as they could.  That was how the session began and everyone began being artists.  In a sense, I wish I could have been there to here some of the conversations, suggestions and I am sure that a good time was had by all that attended. 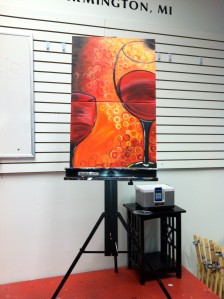 The other aspect of the session was that one could bring wine to enjoy while the painting was going on.  This, perhaps is the twist?  Since my Bride went with her friend that liked to give me wines with unique labels, I sent them off with a wine carrier, two glasses, foil cutter, cork screw and a vacuum pump, in case they did not have that big of a thirst and were really dedicated to the arts.  Since our friend started us drinking Marilyn Merlot wines, I put in the carrier a Norma Jean Merlot 2006 from Napa Valley.  For the uninitiated Norma Jean was Marilyn Monroe’s name before she acquired her stage name.  So when the winery issues a younger wine that now call it Norma Jean and use a younger photo of Marilyn for the labels.  I must admit that I do enjoy the wines from this winery, thought the first bottle that I was given, I thought it to be a joke.  I was surprised, but this winery deserves a story all of its own. 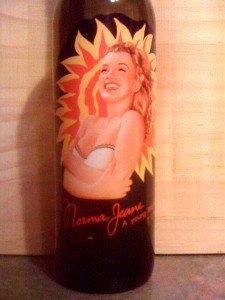 A non-technical wine writer, who enjoys the moment with the wine, as much as the wine. Twitter.com/WineRaconteur Instagram/thewineraconteur Facebook/ The Wine Raconteur
View all posts by thewineraconteur →
This entry was posted in Wine and tagged California, Marilyn Merlot, Merlot, Napa Valley, Norma Jean. Bookmark the permalink.

2 Responses to Painting with a Twist