Posted on October 13, 2012 by thewineraconteur

It is not too often that one can go out for dinner and be entertained by the staff.  We had dinner at DePalma’s one time, where the waiter broke off into an aria between his customary duties.  Talk about an unexpected culinary delight, of course if the waiter could not sing, it could have been disastrous.  My Bride loves the opera and I can take it or leave it, so she was elated.

DePalma’s is more or less a neighborhood restaurant that features quality Italian meals.  They pride themselves on homemade pasta, which is how they advertise their forte.   I believe in going with the flow, why order something that may be incongruous with the rest of a restaurant’s menu.  So we had a couple of fine pasta dinners, and as I mentioned earlier, we were regaled with impromptu arias. 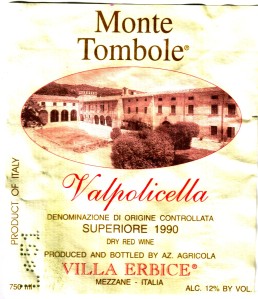 We had a bottle of Valpolicella that evening.  Valpolicella is grown near Verona, and is named after the grape varietal.  It is one of the more popular wines of Italy and is known for it’s dry after taste, which works well with most pasta dishes.  It is not as polished as an Amarone de Valpolicella, because of the difference in the production of the wine, but the basic Valpolicella wine is considered best to be drunk young.  As a caveat, I have had some older Valpolicella wines that aged quite well, without any problems or diminished taste.

A non-technical wine writer, who enjoys the moment with the wine, as much as the wine. Twitter.com/WineRaconteur Instagram/thewineraconteur Facebook/ The Wine Raconteur
View all posts by thewineraconteur →
This entry was posted in Dining, Wine and tagged Italy, Valpolicella. Bookmark the permalink.

5 Responses to Opera With Dinner