Posted on March 15, 2019 by thewineraconteur

You may have noticed that when we are in Las Vegas to see the family, we are always out and about going to restaurants.  I do think that is the norm, when one goes to Vegas, though most people don’t have dinners for ten every night.  One of the things that we always have to prearrange when we are at a restaurant is where the waiter or the waitress takes the bill for the evening, because the kids will try to make a heroic effort to grab the bill and in today’s climate the kids have enough expenses raising their own family, let alone paying for the old man.  At least that is the way I look at it, though it was different when I was their age, or though it seemed.   I always tell them, that we plan on spending the money, when we come to Vegas, and when they come to Detroit, then they can be a sport, though we never let them do that here either.  I guess one always worries about your kids, no matter how old they are. 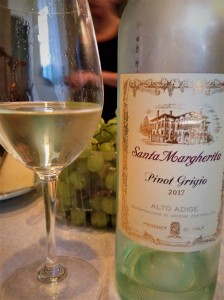 Well our one son knew that it was a loosing battle to try to take us out for dinner, I mean we even pick up the tab for the very mediocre pizza at the bowling alley that we go to every time we are town, just for another outing, or for the cinema.  He wanted us to come to his house for a dinner, and my Bride agreed.   I used to have an uncle that enjoyed being out and about, but whenever he had dinner at a house, he always had water or pop, he only really enjoyed his adult beverages, if he could hear a cash register ringing in the background, and especially if he knew that he was picking up the tab.   We were going to have Chicken Paprikash, just a classic Hungarian dish that has been taught and handed down from generation to generation in our Daughter-in-Law’s family.  I even reminded the kids how they used to insist that I take them periodically to a restaurant in my old neighborhood for an open face roast beef sandwich with Paprikash gravy, and they only kind of remembered it, but that was thirty years ago.  The grandchildren were happy, because they could play their video games after dinner, and even though I think they enjoy being with their grandparents, kids get bored and want to do what kids do.  Of course, we did help and stopped at a grocery store before we got there, to pick up dessert.

We also bought some wine, and I am so sure that you would be surprised to hear that.  We actually had to go to two stores, because of the wine, which I will explain.  While at the grocery store, but away from the aisle with the one-armed bandits I found a wine that I could be happy with, and I think everyone could.  We had probably the most famous and popular, and the wine that created the Pinot Grigio craze in the first place.  We opened up a bottle of Santa Margherita Pinot Grigion Alto Adige 2017.  The estate was founded in 1935 by Gaetano Marzotto, and today is widely renowned for its popular Pinot Grigio wines, though they also have vineyards and wineries all around Italy.  They are rather famed and even credited with creating the Pinot Grigio of today, by not allowing the juice to be with the must, so that the tell-tale rust or pink that is prevalent from the grape is not seen.   After the pressing and fermentation, the wine is aged in Stainless Steel until the bottling for a nice crisp wine that is very easy drinking.  The Alto Adige or the Sud-Tirol is the farthest northern wine making region in Italy and it is quite Germanic and Pinot Grigio is the single largest producing grape for the area.  The other wine that we had to go to another store to get was a wine that we had just earlier that week, and I keep telling her, that she is ruining my ability to tell spin my yarns with always the same wines.  She loves to drink the same wines, and I am always looking for something new, but I lost this round.  We were going to enjoy some more of the Arrowood Vineyard and Winery Sonoma Estates Cabernet Sauvignon 2013 and the wine is just beautiful.  Arrowood was founded in 1986 and in 2006 became part of the Jackson Family Wines.  The fruit for this wine was harvested from Knights Valley, Sonoma Valley and Alexander Valley.  The wine is a blend of eighty-nine percent Cabernet Sauvignon, ten percent Merlot and one percent Cabernet Franc.  The wine was aged for eighteen months in a mix of oak, with thirty percent new.  I was totally enthralled again with the notes of black cherry and a long finish, and the fact that I still think it was a total bargain.