Posted on February 24, 2019 by thewineraconteur

My dinner club was in a bit of a turmoil, as we had lost one of our standby restaurants.  It is getting harder and harder to find a restaurant that has a private room, as most venues value cramming in a couple of more tables in the floor plan for more turn-overs.  One of our members found a place, that I have driven by several times a month and never even batted an eye at, because they call themselves a “family restaurant” and I have always associated that to mean one step up from a glorified sit-down, fast-food eatery that has no liquor license.  I was wrong, because Richards not only had a very nice private room, they were very accommodating and they have a liquor license. 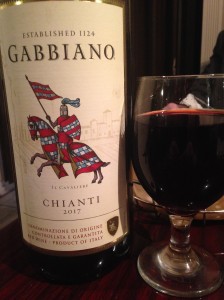 Most of the venues that we go, give us a choice of usually three different entrée dishes, here we had a choice of eight different dishes.  It was a good list of options; Pork Chops, Fried Shrimp, 12-ounce Rib-eye Steak, 12-ounce Prime Rib, Shrimp Scampi, Baby Back Ribs, Broasted Chicken and Smothered Chicken Breast.  I opted for the Baby Back Ribs as I was assured that the meat would fall off the bones, and that was so true.  I started the dinner off with Cole Slaw, and the entrée was paired with hand cut potatoes.  Everyone that ordered the Ribs was amazed that it was a full slab, and everyone had to request a “carry-out” box, as I could only eat half of my order. 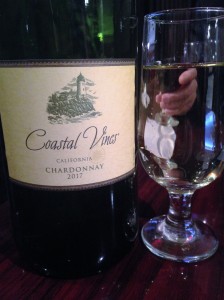 Richards had a full bar, so that was no problem, but the wine selection was a bit short, as all of the wines were poured from magnums, so they sold wine by the glass or the carafe.  I started off with Coastal Vines Cellar Chardonnay 2017 with a California appellation.  I am sure that the wine is done in Stainless Steel, and the winery is part of Bronco Wine Company.  I found the wine to be rather middle of the road, but I have seen reviews describing it as buttery and oaky and I did not notice either of those qualities.  I think it is a decent party or group wine.  The second wine that I tried was Castello di Gabbiano White Label Chianti DOCG 2017.  Castello di Gabbiano was established in 1124 in the Tuscan region and the majority of the wines that they produced are Sangiovese based, which is no surprise.  This particular wine is ninety percent Sangiovese and the balance are native red grapes.  This wine is made for immediate consumption and not for cellaring, and for a basic Chianti it was fine.  In spite of the small wine selection, I can guarantee that the club will be returning here, as there were no complaints about the food, and that is very important.

A non-technical wine writer, who enjoys the moment with the wine, as much as the wine. Twitter.com/WineRaconteur Instagram/thewineraconteur Facebook/ The Wine Raconteur
View all posts by thewineraconteur →
This entry was posted in Dining, Wine and tagged Bronco Wine Company, California, Chardonnay, Chianti, Coastal Vines, Gabbiano, Italy, Sangiovese, Tuscany. Bookmark the permalink.